Filmusik turns to the kaiju genre with 'Gamera vs. Guiron' 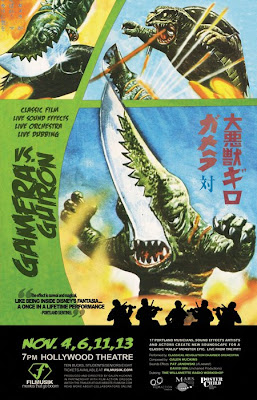 Filmusik, an enterprise that combines film with live entertainment in a hearkening-back to the days of yore, presented the first performance of the Japanese cult classic 'Gamera vs. Guiron' last night at the Hollywood Theatre. Members of Classical Revolution Portland delivered live music by composer Galen Huckens, the Willamette Radio Workshop provided voice actors and live sound effects were by David Ian, Pat Janowski and friends.

An enthusiastic showing of geeks, film buffs, and scenesters of all schools and ages showed up for the premier. Huckens' composition began the film with a pleasant, pastoral spacescape, accompanied by a rich voice-over monologue extolling the wonders of the limitless universe. 'Over-the-top' was the watch-phrase of the evening, as the foley (sound effects) crew and voice actors paid imaginative homage to the campy production values of the movie. The intense concentration and accurate timing of the foley artists was something to behold all evening long; many times all four of them were producing more than one effect simultaneously, with an impressive variety of objects: balloons, rattles, voice synthesizers, even a hand-cranked wind machine came into play.

The kaiju genre of films (kaiju are monsters, more or less; think of Godzilla as the king of the kaiju) are renowned for their hokey production limits and histrionic emotional scope, and because of that they have retained a large cult following to this day. Gamera, a giant, fanged, flying space-turtle who can retract all his limbs and turn them into smoky, flame-belching jet engines, was well-known as a 'friend to children,' as the film repeatedly stated.

The main protagonists, two young boys who board an abandoned spacecraft and mistakenly launch themselves to the evil alter-ego of Earth, planet Terra, are emotionally attached to Gamera. The whale-song-like wailing of the foley artists in providing Gamera's voice succeeded in portraying him as a sympathetic, heroic creature, and the audience delighted in this, clapping, hooting, cheering him on in battle, and commiserating with his suffering. All of the performers involved, while definitely revelling in the kitsch, also seemed to understand the taken in its entirety, the film was not meant to be a laughable rollick, though it is hard to imagine it as anything else viewing it through our eyes today.

CRPDX played sensitively and intuitively all evening long. Huckens' score throughout provided an almost consistent counterpoint to the laughs and cornball acting, imparting a sombre, darkly beautiful element that balanced the overall mise-en-scene and kept intact the emotional import of brave, besieged children battling immensely evil forces way beyond their control. The knife-headed bad-boy kaiju Guiron who shoots throwing stars from his head, the giant silvery, fox-headed bat Gyaos who breathes laser beams, the cannibalistic Japanese-Terran babes who are the sole human survivors on their destroyed planet, the skepticism of their own parents--all these elements are aligned against the children, who want nothing more than to free the world from war and traffic accidents. Their only protector--Gamera, who has his own bouncing-ball theme song that appears throughout the movie, which the audience is encouraged to sing (and eventually does, inspite of themselves.)

Filmusik has succeeded brilliantly once again; Huckens seems to be getting better and better at what he does. The entire live production manages to capture all the camp, humor, and drama inherent in this battle of foam-rubber titans. At the beginning of the film the children lament "Gee, grownups have no dreams." Fortunately they are wrong in that observation, as this darkly comedic reverie at the Hollywood theater so vividly points out. There are three performances left: November 6th, 11th, and 13th.
Posted by Lorin Wilkerson at 10:47 AM

Anonymous said...
This comment has been removed by a blog administrator.
November 6, 2009 at 5:39 AM

The reason why kaiju films are amusing and campy are that they are meant for children. More specifically, children of another culture. As a person of Japanese descent, I'm appalled that you would endorse this sort of blatant cultural mockery.

I'm intrigued by your response to my review, and am curious about two things:

2. What do you feel is wrong with adults from one culture enjoying entertainment from another culture, whether or not such entertainment was originally meant for children?

I have loved kaiju films since I was a child, and although I am able to appreciate them on different levels now than when I was a child, I fail to see how any aspect of my enjoyment constitutes cultural mockery and would like to know how you think it does.

Thanks for taking the time to comment on my review.

Man, I hope you get this before you go off all half cocked on some message board and make an ass of your... Oops.