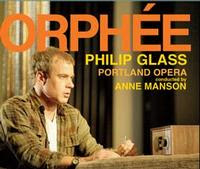 This year saw a milestone in the Portland Opera's history with their first-ever commercial recording, a complete rendering of Philip Glass's Orphee. Recorded during Orphee's run in November of 2009, the surprise hit of Portland Opera's last season transfers admirably to this disc from Orange Mountain Music. Not only is this CD a first for the PO, but it is doubly important in that it is also the first complete recording of this opera, the last of Glass's triptych based on films by Jean Cocteau to be put to disc.

The production benefited from the previous experience with this work brought to the fore by conductor Anne Manson and principals Philip Cutlip (Orphee) and Lisa Saffer (La Princesse), all of whom performed this previously with the Glimmerglass Opera. The recording succeeds brillantly in capturing the crispness and concision of the dialogue, which was adapted by Glass from the script for the 1949 Cocteau film of the same name. Cutlip's rich, expressive baritone and soprano Lisa Saffer's moody Princesse seem to leap out from the recording with their sincerity and intensity. The dialogue moves along as in a film; i.e. no long expressive arias, so the singers have the challenge of both continuously advancing the plot while delivering enjoyable listening from a musical standpoint.

The oft-mysterious framework provided by Glass's orchestral underpinning comes through in delicious color, from the hurly-burly French cafe music to be found in the opening scene to the dark mystery of the journey to the underworld, and the ceaseless movement of the music seems to command rapt attention. Particularly poignant are the tender moments between tenor Ryan MacPherson as Heurtebise and Georgia Jarman as Eurydice, Orphee's sometimes-scorned wife, as well as Orphee's obsessive madness with the cryptic radio broadcasts that he takes to be the finest poetry in the world. The heart-rending decision by Heurtebise and La Princesse to defy the will of the underworld and return their loves to their former lives after the harrowing journey beyond the doors of death is as inspiring and beautiful as one could hope opera to be. As a side-note, the French diction is marvelously clear throughout.

Portland Opera has distinguished itself by releasing such a meaningful, high-quality recording by one of the world's most important living composers. In short, this is a brilliant recording of a brilliant work. It is one that will bear repeated listening, with new facets to be discovered at each turn.
Posted by Lorin Wilkerson at 6:37 AM