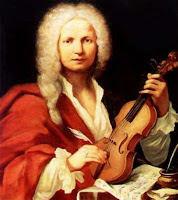 Exciting news from Scotland: a Vivaldi flute concerto called "Il Gran Mogol," which was known only by its reference in the catalog of an 18th-century Dutch bookseller, was discovered in the National Archives in Scotland. It was missing only the second violin part, which has been reconstructed. Its first-ever performance will be in Perth in January. Read more about it here.
Posted by Lorin Wilkerson at 7:37 AM