In Mulieribus to give CD release concert at Classical Classical Millennium 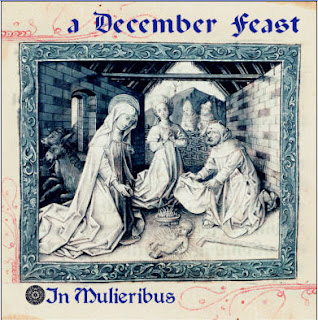 From the press release:
Classical Millennium, Portland's classical-only CD store, is pleased to present In Mulieribus in live performance. Join this early music choir of seven women at the store, 3144 East Burnside in Portland, on Saturday, October 9, from 2:00 - 3:00 P.M. to hear them perform excerpts from their new album, A December Feast. All In Mulieribus recordings will be specially sale priced for the event.

This new CD, A December Feast, is the third in the group's series of self-released discs, and will feature music for the various feasts in December, including of course, Christmas. The two previous recordings were featured as Critics' Picks in The Oregonian newspaper. The first, Notre Dame de Grâce, presents conductus compositions from the late twelfth century, and the second, In Mulieribus: LIVE, is a compilation of live recordings from concerts between 2004-2008.

Founded in 2004, In Mulieribus (the Latin phrase meaning “amongst women”) is a female vocal ensemble that focuses on works written primarily before 1750, without instrumental accompaniment. In Mulieribus (IM) presents its own annual concert series in Portland, Oregon, and has also appeared as guest artist at the Portland Art Museum, the University of San Diego, and the Multnomah County Library. Upcoming performances include the 2011 Abbey Bach Festival at Mt. Angel Abbey in St. Benedict, Oregon, and the Linfield Lively Arts Concert Series at Linfield College. From its inception, the mission of In Mulieribus has included both an artistic and philanthropic component. Unique among performing arts groups, a portion of all concert proceeds goes to benefit another non-profit organization that serves the community.

Performances by In Mulieribus have been broadcast on nationally syndicated radio shows such as Performance Today and Millennium of Music. The ensemble has recently reached beyond its focus on early music, to highlight works by women composers and to support new music.
Posted by James Bash at 10:43 PM