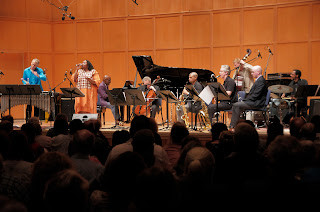 [Photo credit: Jim Leisy]
Over the past 43 years, Chamber Music Northwest has built a rock solid reputation as a top-notch presenter of classical music concerts. Occasionally, it has ventured into other sonic landscapes, such as a couple of summers ago when Sylvia McNair did a full slate of popular songs and when Lalo Schifrin stirred up the audience with a tango-driven concert. Several years have passed by since CMNW sponsored a concert of Dave Frishberg and Rebecca Kilgore; so it was high time that CMNW ventured into jazzland on Saturday, July 6th at Kaul Auditorium by presenting the world premiere of Darrell Grant’s “The Territory,” a suite in nine movements for jazz ensemble. The piece was supported by Chamber Music America’s 2012 New Jazz Works: Commissioning and Ensemble Development program, which was funded by the Doris Duke Charitable Foundation. Grant is well-known locally as a jazz pianist and professor at Portland State University, but his background includes work with vocalist Betty Carter, and musicians Frank Morgan, Sonny Fortune, Roy Hanes, Chico Freeman, Nicholas Payton, and Greg Osby. 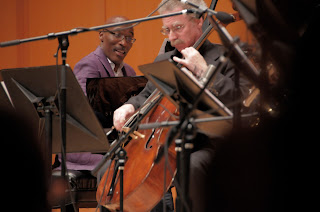 [Photo credit: Jim Leisy]
For “The Territory,” Grant drew inspiration from the history of Oregon – its landscape and its people. The “Hymn to the Four Winds” invoked the native people through a Nez Pierce religious chant. “Daybreak at Fort Rock” depicted a sunrise in the Oregon high desert where human clothing form 9,000 has been discovered. “The Missoula Floods” reached back to the Ice Age when floods shaped the Pacific Northwest. “Chief Joseph’s Lament” drew from a portion of the legendary chief’s surrender speech. “Rivers” portrayed the vitality of water in Oregon. “Stones into Blossoms” delved into the sorrow of 1941, when Japanese –Americans were forced to live in internment camps. “Sundays at the Golden West” harkened back to the first African-American owned hotel in Portland. “The Aftermath (Interlude)” drew on the tragic event of 1887 when thirty-four Chinese old miners were massacred in a remote canyon. “New Land” referred to the attraction that Oregon still has for people who arrive with new hopes and dreams. 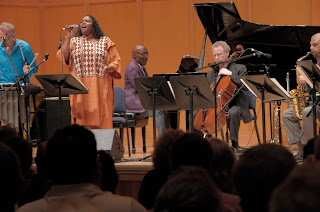 [Photo credit: Jim Leisy]
The sweep of ideas in “The Territory,” was performed by the Darrel Grant Ensemble, which included Grant on piano, Brian Blade on drums, Clark Sommers on double bass, Steve Wilson on saxophones and flute, Joe Locke on vibraphones, Hamilton Cheifetz on cello, Thomas Barber on trumpet, Kirt Peterson on bass clarinet and tenor saxophone, and vocalist Marilyn Keller. Most of the time, the musicians read from a score, but there were many opportunities for solos. The piece began with a groundswell of sound and then transitioned into a pulsating rhythm that was overlaid with Keller singing something like “Hey Ah, Hey O Ah.” Sometimes the piano took over the momentum of the piece with Grant fashioning a number of well-crafted segues. Locke mesmerized the audience with several outstanding solos in which he created a wonderful blur of tones. The ensemble was often too loud for Keller, but she still made a powerful impression when she sang “Never sell the bones of your father and your mother” at the end of “Chief Joseph’s Lament.” Only one of the movements, “The Aftermath (Interlude)” took a slow tempo, but it seemed like a least one more slow movement was needed. Sommers and Blade were exceptional all evening long, and the piece ended with the musicians rising out of their seats to do some rhythmic clapping. Overall, “The Territory” was a triumph of spirit and well worth hearing again. Hopefully, there will be a recording in the near future.

The first half of the program offered two jazz-inflected pieces that became bridges to Grant’s magnum opus. The first of these was George Gershwin’s “An American in Paris,” performed by the husband-and-wife team of Anna Polonsky and Orion Weiss in the version for two pianos. They played the piece impeccably (including some dynamite cutoffs) except that Weiss’s sound was often much louder than Polonsky’s. My experience may have been affected by the fact that my position in the audience was closer to Weiss’s position on stage, but the pianos were turned in such a way that balance shouldn’t have been an issue. 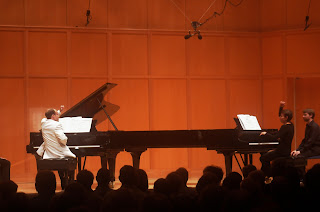 [Photo credit: Jim Leisy]
The second jazzy number was Maurice Ravel’s Sonata in G Major, which was played superbly by violinist Ani Kavafian and pianist Weiss. They excelled in establishing an ethereal atmosphere at the beginning of the first movement (Allegretto), and then transitioning seamlessly to its edgier and more nervous and curious phrases. The second movement (Blues: Moderato) slid back and forth between bluesy passages in which Kavafian would slur some notes and strum others. The third movement (Perpetuum mobile: Allegro) became a high-light reel of Kavafian playing wickedly fast in an unrelenting race to the finish. Weiss’s playing was equally scintillating, and after they crossed the finish line, the audience erupted with a thunderous standing ovation. 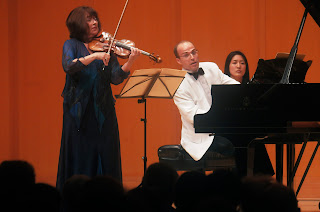