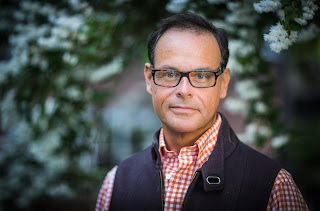 Portland Opera has just announced that Richard Haney-Jardine will become its Marketing and Communications Director, a position that has been vacant for the past two years when Jim Fullan moved to the Oregon Symphony. Here's the official announcement from Portland Opera:

After an extensive national search, Portland Opera General Director Christopher Mattaliano is pleased to announce Richard Haney-Jardine as the Company’s Director of Marketing and Communications.

Mr. Haney-Jardine, a native of Caracas, Venezuela, moves to Portland from Asheville, North Carolina, where he has been consulting for the North Carolina Stage Company as Special Advisor for Institutional Advancement. He joins the Company on July 1, 2013. According to Mr. Mattaliano, “He brings both a deep knowledge and love of opera as well as over 25 years of experience as a dynamic, visionary, and creative leader with proven success at high-profile organizations including Carnegie Hall, Sony Classical, and Houghton Mifflin.”

In his role as Director of Marketing and Communications, he will be responsible for developing long-term marketing and communication strategies in support of Portland Opera productions and events. He will oversee the planning, implementation, and evaluation of all branding, e-commerce, marketing, public relations, publications, and sales activities for Portland Opera, as well as the U.S. Bank Broadway Across America Portland Series.

Prior to that, Haney-Jardine spent 8 years as the Director of Marketing and Creative Services at Carnegie Hall, where he directed four critical operations of the organization: its earned income through licensing, marketing, retail, and ticket sales representing over $15 million per year; its interactive services, including e-commerce and on-line contents; its visitor services; and its creative and publishing services, including art, editorial, and print production groups. For a short term, he was also tapped to concurrently serve as Director of the Weill Music Institute at Carnegie Hall, the Hall’s educational and outreach arm. Previously he worked as Senior Director of International Editorial and New Media Services at Sony Classical; was the Founder and Content Developer of STET, Inc.; and Associate Director of Marketing and Development at Boston Opera Theater. He started his career at Houghton Mifflin, where over a nine-year engagement he moved from Associate Editor to a prominent position as National Bilingual Manager and Senior Supervising Editor.

Says Haney-Jardine, “I have often been asked what a marketing executive does after ‘graduating’ from the hallowed Carnegie Hall. In my case, the answer was to launch my own marketing and communications business. However, after working as an independent contractor for several years, I found that I longed to return to the fold of a prestigious performing arts organization as an integral member of a cracker-jack team. The team at Portland Opera, under the inspired direction of Chris Mattaliano, was the perfect fit for me. And at last, after an almost twenty year absence, I am returning to my first and most enduring love—opera. And what better town than Portland!”

Haney Jardine is a native speaker of Spanish and English, fluent in French and Italian, and possesses an extensive knowledge of German and Portuguese. He is a board member for the MET Opera National Auditions Council New England Region and of the North Carolina Stage Company. He is a published, prize-winning author of prose, poetry, nonfiction, and literary translations. He received his Bachelor of Arts in English and American literature from Harvard University, where he was selected for one of four coveted spots for a creative writing degree, studying under the tutelage of Nobel Laureate Seamus Heaney. He was also a protégé of such eminent writers as the late Pulitzer-Prize-winning poet Gwendolyn Brooks and also a student of of the late Latin American literary luminaries Jorge Luis Borges and Carlos Fuentes. Haney-Jardine is a classically trained pianist and singer, “with no aspirations to take the stage.”
Posted by James Bash at 4:07 PM