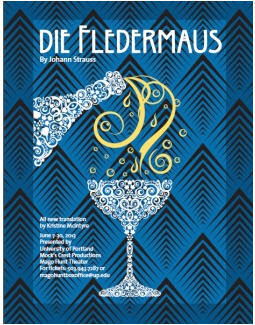 She may have looked like a featherweight, but soprano Catherine Olson almost stole the show during a Mock’s Crest production of Johann Strauss Jr’s “Die Fledermaus” on June 22nd at the Margo Hunt Theater. Whether she was tossing off sparkly high notes, jumping into the arms of tuxedo-clad men, and contorting her face and body for an extra laugh, Olson seemed to be having the time of her life as Adele, the maid who was born for a stage career. Her fine performance was one of several jewels, because Mock’s Crest assembled one of its best casts that I have ever witnessed. Overall, this production of “Die Fledermaus” showed how strong the talent pool of opera singers in the Pacific Northwest has become.

Wesley Morgan was rock solid the wealthy, two-timing, and volatile Gabriel von Eisenstein, and he knew how to find just the right amount of charm to make his character lovable. His efforts to finagle and deceive were parried and uncovered by his wife Rosalinde, sung exceptionally well by Lindsey Cafferky. In the role of Rosalinde’s former lover, Alfred, Brian Tierney came oh so close to enjoying a full evening with her but suffered the indignity of serving Eisenstein’s jail sentence. He was hauled off by Frank, the prison governor, sung by Thomas Prislac, who got the loudest laugh from the audience when he joined Alfred/Tierney in song.

Stacey Murdock created a masterful Dr. Falke, who figured out a way to trick Eisenstein and expose him as a fool. But in doing so, he also tricked Rosalinde, Frank, and Adele. Everyone went overboard at a wild party thrown by Prince Orlofsky, sung with élan by Valery Saul. In the end, they all ended up at the prison where an inebriated Frosch (Jon Vergin) ccould barely comprehend why so many people were interrupting his solitude. To top it off, Eisenstein's bumbling lawyer, marvelously played by Tony Stroh, helped to stir up the froth.

Set in the Roaring Twenties of New York City rather than the traditional Vienna of the late Nineteenth Century, this production of “Die Fledermaus” showed a lot of drive and spunk. Conductor Tracey Edson maintained reasonable tempos, and the chamber orchestra played well. Stage director Kristine McIntyre made sure that the action was up front and center and the cast made excellent use of every single inch of the small stage. Flapper dance moves were mixed up here and there with John Travolta-like gestures of the 1970s. The chorus sang with gusto and added exuberance to the party atmosphere at Orlofsky’s.

Yet even with all of the excellent singing, sometimes the orchestra was too loud and words were lost. The ideal solution to this would be a screen above the stage or to the side with the words projected. This is the standard method at Opera Theatre of St. Louis, which does all of its productions in English. Of course, projected text is a big expense, and Mock’s Crest operates on a small budget, but that would be a major step in improving the show.
Posted by James Bash at 9:00 AM

Hear hear. That was a bang-up job.