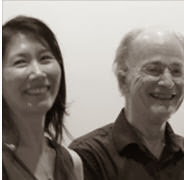 Violinist Sarah Kwak and pianist Cary Lewis put their considerable artistic prowess on display on Sunday evening (September 15), delivering an incisive performance of works by Igor Stravinsky, Sergei Prokofiev, Francis Poulenc, and Richard Strauss to a very engaged audience at the Old Church. The level of difficulty of the pieces in the program was on the high side of the Richter scale, and both performers held nothing back, which made this concert a terrific way to start the fall season. In particular, the concert offered an opportunity to see Kwak, concertmaster of the Oregon Symphony, work her magic up close, and she mesmerized everyone.

The concert, sponsored by 45th Parallel and All Classical Portland (KQAC), started with Igor Stravinsky’s “Suite Italienne,” whose six movements are based on his ballet, “Pulcinella.” Kwak and Lewis seemed to enjoy the way that the music shifted from Baroque to Romantic and the quirky turns of phrase that is unique to Stravinsky, including some really odd passages for the piano in the sixth movement.

Kwak and Lewis followed the Stravinsky with Prokofiev’s “Five Melodies for Violin and Piano.” Kwak imbued the long, extended lines with this piece with a golden, rich tone. Other highlights from Kwak included trills in the lower register, double-stops, a ghostly-toned segment, playfully lyric lines, and whistling high notes – all impeccably done. Lewis supported her with lively accompaniment, especially when he played tantalizing lush passages that was juxtaposed with the vibrant sound of the violin.

Lewis introduced Poulenc’s “Sonata for Violin and Piano” with a few words that described the piece as moving between Stravinsky-inflected passages and lounge lizard passages. Although it was an apt description, both he and Kwak succeeded in elevating the music so that it did reveal the emotions of the composer, who dedicated the piece to the famous Spanish poet Federico Garcia Lorca. Some of the best moments occurred in the middle movement when violinist and pianist created a seesaw of turbulence that turned later into a haunting atmosphere of closely linked phrases and finally an upwards glissando that turned everything into a question mark.

The final piece on the program was Strauss’s “Violin Sonata in E-flat,” an unabashedly Romantic piece that the composer wrote when he fell under the spell of soprano Pauline de Ahna, who later became his wife. The passionate lyricism of Kwak’s playing served the music incredibly well. She created a variety of moods that shifted all over the place: stormy, wistful, restful, heroic and grand. Her singing tone made it all gorgeous to the ears.

The audience rewarded Kwak and Lewis with a standing ovation and were treated to an encore, a lovely rendition of Edward Elgar’s “Salut d'amour.” The next time these two perform, it would be great if more violin and piano students were in the audience. That would've made the concert even better.
Posted by James Bash at 6:59 PM