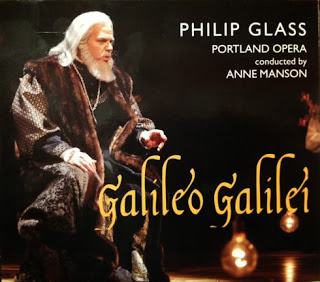 Earlier this week, Portland Opera released its recording of Philip Glass's opera "Galileo Galilei" under the Orange Mountain Music label. This is such a new recording that it has not been listed in Amazon or on the Orange Mountain Music website. So, it looks like you have to call Portland Opera or go to its HQ to purchase a copy. Here are the particulars about the recording from the company's press release:

(Portland, OR) – Portland Opera is pleased to release the first commercial recording of Philip Glass’ Galileo Galilei, available September 25, 2013 under the Orange Mountain Music Label. Recorded live at the Newmark Theater in March 2012, this West Coast premiere was the Company’s first production of a 21st century opera. Galileo Galilei will be Portland Opera’s second commercial recording of a Philip Glass work, following the success of their 2009 recording of Orphée, which was voted among the “Ten Best of the Year” by Opera News.

“The productions and commercial recordings of Galileo Galilei and Orphée have been tremendous experiences for this company,” said General Director Christopher Mattaliano, “exploring a contemporary work by a living composer on the stage and then making the music readily available to a world wide audience is a great source of pride for us. This is also a landmark event for our Resident Artist Program and annual chamber opera, both of which have become keystones in our Company’s mission.”

Composed in 2002, Galileo Galilei is Philip Glass’ 18th opera, a chamber work in one act for nine singers and fifteen instrumentalists. The opera is based on the life of the Italian astronomer, Galileo Galilei (1564-1642), with a libretto by the noted American playwright and director Mary Zimmerman. Portland Opera’s production at the Newmark Theater, directed by Kevin Newbury, was praised by Opera News as “a production that was fluid and playful in the scenes of discovery,” and also for its, “ecstatic vocalise over a rocking, percussive orchestra.”

“We were delighted to have ANNE MANSON back for our second Glass recording,” said Director of Artistic Operations Clare Burovac. “She has an extraordinary feeling for the work of Philip Glass.” In a review of the Orphée recording in 2009, The New York Times declared, “the vibrant Ms. Manson works effectively to bring transparency and balance to the orchestra, without the loss of plush colors and harmonic intensity.” She was equally successful in Galileo Galilei, and Opera News agreed, saying “conductor Anne Manson held everything together, as central and as solid as gravity.”

The Galileo Galilei cast was primarily made up of the members Portland Opera’s 2011/12 Resident Artist Program. The company developed this program in 2005 to serve as a bridge between the conservatory and professional worlds, and a highlight is the Company’s annual chamber opera, which features these emerging artists in leading roles. Resident baritone ANDRÉ CHIANG sang the role of Younger Galileo with a “bold and resonant voice” (Portland Mercury), and bass NICHOLAS NELSON “sang with gravitas” (Opera) as Pope Urban VIII, Cardinal Barberini, and Simplicio. Seattle’s online news site Crosscut.com said “Young soprano LINDSAY OHSE presides over one of the opera’s loveliest scenes in the vocally soaring role of Galileo’s beloved daughter, Maria Celeste,” and Resident Artist “CAITLIN MATHES contributed an elegant mezzo” (Opera News). Former Resident Artist JOSÉ RUBIO contributed his “strong baritone” to the roles of Priest and Cardinal 3 (Opera News).

Filling out the critically acclaimed cast was countertenor JOHN HOLIDAY, who “sang with remarkably pure tone” (Opera), and Portland Opera veteran tenor RICHARD TROXELL who was praised by Opera for creating “a sympathetic elderly Galileo, recalling his life with a voice filled with anguish.” Mr. Troxell, Mr. Rubio, and Mr. Holiday all reprised their roles in the July 2013 production of Galileo Galilei at Cincinnati Opera.

“We are delighted to have the cooperation from all of the unions involved in this project, including the American Federation of Musicians, the American Guild of Musical Artists, and the International Alliance of Theatrical Stage Employees” said Mr. Mattaliano. “This recording would not have been possible without them and we are truly grateful for their participation,” he added. Michael Riesman, music director and principal keyboardist of the Philip Glass Ensemble produced both Orphée and Galileo Galilei for Orange Mountain Music. Orange Mountain Music’s mission is to archive all of Philip Glass’ music so that as many of his compositions as possible are available commercially. The commercial recording of Portland Opera’s Galileo Galilei will be released complete with libretto and production photographs. Orange Mountain Music is distributed by harmonia mundi USA.

Portland Opera singers are members of the American Guild of Musical Artists (AFL-CIO) the labor union representing professional singers, dancers and staging personnel in the United States. This recording was produced with the generous support of Tremaine and Gail Arkley, Jeannine B. Cowles, Greg and Mary Hinckley, Louis and Judy McCraw, and Mrs. Philip H. Miller; as well as the National Endowment for the Arts and the Opera fund of OPERA America.
Posted by James Bash at 10:27 PM