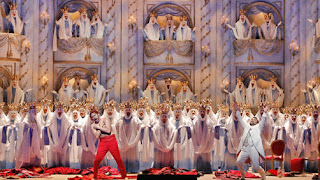 San Francisco Opera’s production of Arrigo Boito’s "Mefistofele" is one that shouldn’t be missed. It’s a stunning production that tells the story of Faust and his bargain with the devil Mefistofele, broadly paralleling Goethe’s "Faust." The "Mefistofele" presented at the War Memorial Opera House featured the formidable Ildar Abdrazakov in the title role and international stars Ramón Vargas as Faust and Patricia Racette as Margherita. Although the three principals sang superbly in the opening night performance (Friday, September 6), it was the company’s opera chorus that carried the evening with stellar contributions from top to bottom.

Because Boito’s "Mefistofele" has so many big choral numbers, the chorus, prepared by Ian Robertson, plays a much larger role than in most other operas. The volume of 90 voices opened and closed the opera impressively as a massive heavenly choir, bedecked with golden crowns that twinkled in the galaxy. They were augmented with 30 children choristers, whose voices Mefestofele found most annoying. A colorfully resplendent chorus dominated the Easter Sunday scene and their bodies, in varying states of nakedness, stamped a lasting impression of gleeful decadence during the Walpurgis Night scene. (Please note that no children were involved in that scene.)

Preened to the max in red, Abdrazakov’s Mefestofele brimmed with confidence and swagger, which gave credence to his wager with God that he could win the soul of Faust. He almost sneered when he declaimed that the task was hardly worth the effort because mankind was such a feeble entity (“I can hardly bear to tempt them to evil”), and he lost no time signing up Faust and introducing him to Margherita.

As the disillusioned old scholar who becomes rejuvenated in body and spirit, Vargas sang brilliantly, especially when he expressed fear for Margherita’s wellbeing during the Walpurgis revels and also when he tried to get her to leave prison. Racette created a Margherita that convincingly changed from a girl smitten with the love for a dashing gentleman to a woman who was distraught and on the verge of a mental collapse. Her Elena was also wonderful, although the character – representing the legendary Greek beauty – has no real warmth.

The production, co-owned by San Francisco Opera and the Metropolitan Opera, was conceived by Robert Carson and premiered by San Francisco Opera in 1989 and presented again in 1994. Under revival director Laurie Feldman, it still packs a punch and makes the episodic nature of the story unfold in a fresh way. The red flames of hell, the sky blue of heaven, the super-sized telescope, the merry-go-round garden, the cat-walk-of-a-party-table at Walpurgis Night, and the theater boxes were some of the many visual delights. Perhaps the nudity wasn’t needed, but Walpurgis Night was supposed to have a bacchanalian quality; so it did work well. Plus, Mefestofele conducted the revelers from the front of the stage, whipping them into a state of exhaustion. The orchestra, led by music director Nicola Luisotti, played with intensity. Luisotti, in fact, had no problem with his musical forces. He did have a problem with the audience. Since it was gala night, there was a lot of chatter, and after the pause in Act II, Luisotti signaled the patrons to be quiet, but they ignored him. That caused him to turn around and say, “Please be quiet.” After a lot of “shhing” throughout the hall, the music finally got underway.

Since operagoers had just ponied up a lot of money for the gala, they were probably not going to be kicked out of the opera house. Most of them weren’t in their seats when the opera General Director David Gockley and two members of the board appeared on the stage to give their opening remarks at 8:05. Consequently, the first downbeat didn’t happen until around the 8:20 mark and the curtain went down on the final scene just a few minutes before midnight. At the beginning of Act IV (where Faust travels to ancient Greece), I saw a lot of empty seats. Perhaps they didn’t want to see the Epilogue where Mefestofele protested God’s pardon as Faust got hauled into heaven with the glorious sound of the chorus shimmering about him. It was spectacular.
Posted by James Bash at 9:09 AM