Pete Seeger, the great folk singer, died yesterday at the age of 94. There are many tributes to him, including this one in the New York Times. I actually met Seeger once. I was attending the national convention of Lutheran youth (Luther League) at Madison Square Garden in 1970, and Seeger was on the program, and sang for us (15,000 teenagers) with Jim Collier. I found the photo (online here) above, which shows one of the moments of that performance. Somewhere during there performance, Seeger invited everyone to come down to his sloop, the Clearwater, which was docked at a pier on the Hudson side of Manhattan Island. As part of a tour that some of us were given during this convention, we stopped near his dock and had to walk a little ways to get to his boat, but we did get there and, low and behold, Seeger was there, too. He invited us onto the deck of the Clearwater, and I got to shake his hand. He was nice and friendly. I don't recall what he said, but it was a moment that I've never forgotten. 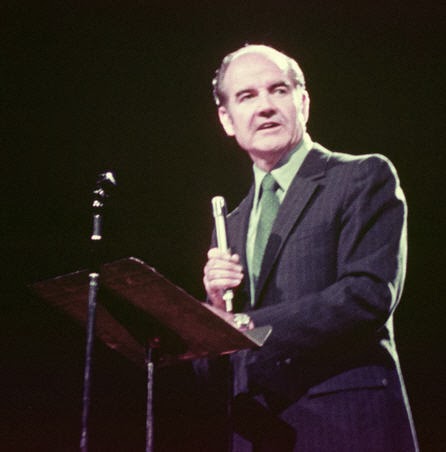 I was there and it was a gathering to remember! Now nearly 50 years later I am a Lutheran Pastor. Who'd a thunk it?