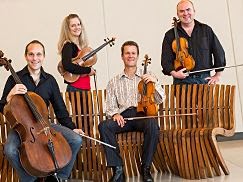 It’s all in the timing. I’ll bet that some of the members of the St. Lawrence String Quartet were thinking that thought to themselves when they arrived in Portland earlier this week for a couple of concerts. Here in P-town, it was a balmy 45 degrees while the upper northeast portion of the United States – as well as most of all of Canada – was frozen over with record cold temperatures.  Speaking of warmth, the last time that I had the opportunity of hearing the SLSQ was in Charleston, South Carolina at the Spoleto Festival USA back in June of 2007, and I’ve never forgotten the ensemble’s sound and the extra-animated playing style of first violinist Geoff Nuttall. So, it was with some heightened anticipation that I went to Lincoln Performance Hall at Portland State University on Tuesday, January 7th to listen to the SLSQ perform the second of two concerts that were sponsored by the Friends of Chamber Music.  In playing a program of works by Haydn, Martinú, and Dvořák, the SLSQ drew from a large sonic palate and created a sumptuous sonic experience.
The SQSL left no note unturned in its performance of Haydn’s Quartet in C Major (aka “Emperor”), one of the most famous pieces in the repertoire. The foursome (violinists Nuttall and Mark Fewer, violist Lesley Robertson, and cellist Christopher Costanza) constantly mined its lovely passages, creating exquisitely matched tones, taking the noble themes at an unhurried pace, and achieving lift-off in the presto-finale.
Martinú’s Quartet No. 5, a dense, emotional roller-coaster of a piece, received an incisive interpretation by the SLSQ. Quavering high melodic lines were projected by Nuttall over a rough tonal surface created by his colleagues. There were moments when the ensemble collectively descended into the depths of despair and then climbed out to a high place that had a glimmer of hope. This plunge into darkness and then ascent into something a little lighter but not explicitly joyful gave a piece a sense of unfulfilled relief.
The program ended with a thoroughly engaging performance of Dvořák’s Quartet in C Major with its melodically-charged lines. From the spring-like opening movement (evoking flower, birds, and sunshine) through the graceful melodies of the second to the conversational third and finally the vivacious and wild fourth movement, the SLSQ entertained the audience with superb playing. It was plain fun to hear the quartet go all out with musical guns a-blazing.
The sustained applause brought the ensemble out for several bows, and they responded by performing the gypsy-like minuet from Haydn’s Opus 20. But before they played it, Nuttall challenged the audience to try to find the three-beat rhythm of the piece. Popa Haydn had a habit of messing with the listeners and the quartet’s playing proved that to be true once again.
Posted by James Bash at 11:34 PM