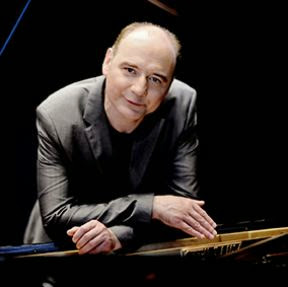 Pianist Igor Kamenz blazed his own trail in Portland, performing a very demanding program that offered an exciting contrast between the flashy Baroque style of Scarlatti and emotionally exaggerated excess of Liszt. In his recital on Monday night (September 22nd) at Lincoln Hall, he used superior technique to accentuate the dynamics of each piece. It all added up to an impressive concert by the Russian native who was making his Portland debut under the auspices of Portland Piano International. That shouldn’t have been a surprise to listeners, since the 46-year-old pianist has won 18 first prizes in international competitions and made numerous recordings, but he has been so busy in Europe that made his New York debut just last month, performing in the Mostly Mozart Festival.

The first half of the concert featured ten sonatas by Domenico Scarlatti pieces, most of which Kamenz has recently recorded and released on the Naïve label. The opening sonatas (K. 96, K. 24, and K. 119) were scintillating in execution with one hand nailing 32nd notes while the other quickly sprang over the top to just touch a note. Three of the following sonatas (K. 197, K. 322, and K. 109) offered a welcome reprieve with relaxed tempos and simpler themes. Unfortunately, these quieter pieces were interfered by Kamenz’s own breathing, which took on an inexplicable wheezing quality. The next set of light-hearted and fast sonatas (K. 492, K. 17, and K. 29) were loud enough to cover any breath-marks. They had a remarkably delightful spirit that turned the tricky passages into playful adventures.

At the start of the second half of the concert, Kamenz delivered a mesmerizing decent into hell via Franz Liszt’s “Dante Sonata” (“Après une Lecture du Dante: Fantasia quasi Sonata”). The defiant chords, the rapid shifting of rhythm and melody, the showy and complex arpeggios, the wafting passages in upper reaches of the treble clef… it was all stunningly played by Kamenz. He created scenery of anguish and flames as well as lovely and distant sounds that seemed to come from above. It was an over-the-top performance that got everyone out of their seats in rapturous applause.

Kamenz delved into the cantabile essence of four songs by Franz Schubert that were arranged by Liszt. The first two pieces, from Schubert’s song cycle “Die schöne Müllerin” (“The Miller’s Beautiful Daughter”), provided sharply contrasting emotions from the cycle. In the hands of Kamenz, “Das Wandern” (“Wandering”) created the sense of a young lad who sets out on adventure full of hope. “Der Müller und der Bach” (“The Miller and the Brook”) created an atmosphere of loss and desperation. The gently rocking undercurrent and the main melodic line were wonderfully mixed together in Kamenz’s playing of “Auf dem Wasser zu singen” (“To be sung on the Water”), but his interpretation of “Erlkönig” (“The Elf King”), with the pounding hooves, the threatening vision of the specter in the woods, the father with his son in his arms, and the sudden, tragic ending was absolutely convincing.

Another standing ovation followed, and Kamenz responded with an outstanding rendition of Bach’s Fugue No. 3 in C# Major. It was a fitting ending to a spectacular concert that PPI artistic director Arnaldo Cohen neatly summed up in his introductory remarks, welcoming the audience to “planet Kamenz.”
Posted by James Bash at 9:30 PM