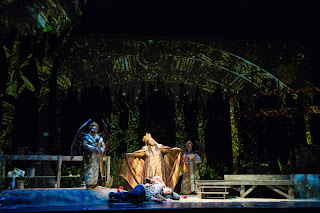 Serious topics deserve serious music, but a little levity might have helped “The Canticle of the Black Madonna,” a new opera that received its world premiere at the Newmark Theatre on Friday evening (Sept. 5). Composer Ethan Gans-Morse and librettist Tiziana DellaRovere and Anima Mundi Productions deserve kudos for tackling post-traumatic-stress-disorder (PTSD) and an environmental disaster, but a bit of humor would have helped the audience to digest the double whammy of a heavy story that fortunately achieved some uplift at the end through kindness of a friend and the miraculous intervention of the Black Madonna.

“The Canticle of the Black Madonna” tells the story of Adam, an Afghanistan war veteran, who struggles with his emotions after returning home to Louisiana from duty in Iraq. His wife, Mara, bears the brunt of his violent feelings, and she is at her wits end in trying to help him return to the man he was before he left for the war. In the meantime, an oil spill off the coast causes them to lose the family’s oyster business. Somehow, in a divine way, the couple is healed through the help of the Black Madonna, a Marian-like deity and a friend, Paul, who opens his house and farmland near the Mississippi River to them.

The opera’s title is inspired by the statues or paintings that depict the Virgin Mary with dark skin. Most of these artworks date back to the 12th to 15th centuries and can be found in Catholic countries. In this opera, the Black Madonna is not an icon or relic, but becomes an active character in the story and represents universal love rather than the Virgin Mary per se. At one point, Adam sees the Black Madonna, even though is not explained how he would have even heard of such a visage. The audience is expected to accept this matter and not question it. If Adam and/or Mara had said that he/she had visited a Black Madonna shrine in Italy or Mexico, it would have made a stronger link between them, but, overall, the link between them was not convincing.

With a whiskey bottle at the ready, baritone Michael Mayes made a formidable impression as the volatile, stressed-out war veteran. Soprano Lindsey Cafferky was equally convincing as the loving spouse who doesn’t give up on her damaged husband. Both singers displayed powerful voices that explored the raw emotions of their respective characters. Less effective was contralto Gwendolyn Brown as the Black Madonna, because her vocal power and quality was very uneven, especially in the upper range.

The chorus, consisting mostly of Portland State Chamber Choir members, did as fine of a job as possible from the upper balcony. There was quite a distance between them a conductor Ryan Heller, and it was very difficult for them to increase the volume. The sound seemed to go straight up into the high dome over the audience.

Heller did a terrific job cuing the singers and leading the orchestra, which was a chamber ensemble of 23 professionals. He seems to have a real affinity for opera, and hopefully will get more opportunities to conduct from the pit.

The style of music for the Black Madonna , angels, and the chorus seemed inspired by the music of the Renaissance and Baroque with the Black Madonna getting several ornamented phrases. The passages for Adam, Mara, and Paul had a contemporary and slightly dissonant feel that conveyed the many turbulent parts of the story very well. The most moving segment came when Adam revealed what had happened to him and his contingent in Afghanistan.

Larry Larsen’s stage design put a modest living room on one side of the stage and an outdoor work area on the other. Towards the back and in the middle was a short set of stairs. Under the effective direction of Kristine McIntyre, the stairs were the realm of the Black Madonna while everyone else moved about the other parts of the set.

If there could be a way to give Paul’s character a little bit of quirkiness or some humor, then I think that it would have helped to break up the constant stream of seriousness that pervades the opera. Or perhaps there's a way to reduce some of the text of the chorus or the Black Madonna. It can be argued that other operas have little or no humor (for example, “Wozzeck”), but then the music has to carry more of the weight. 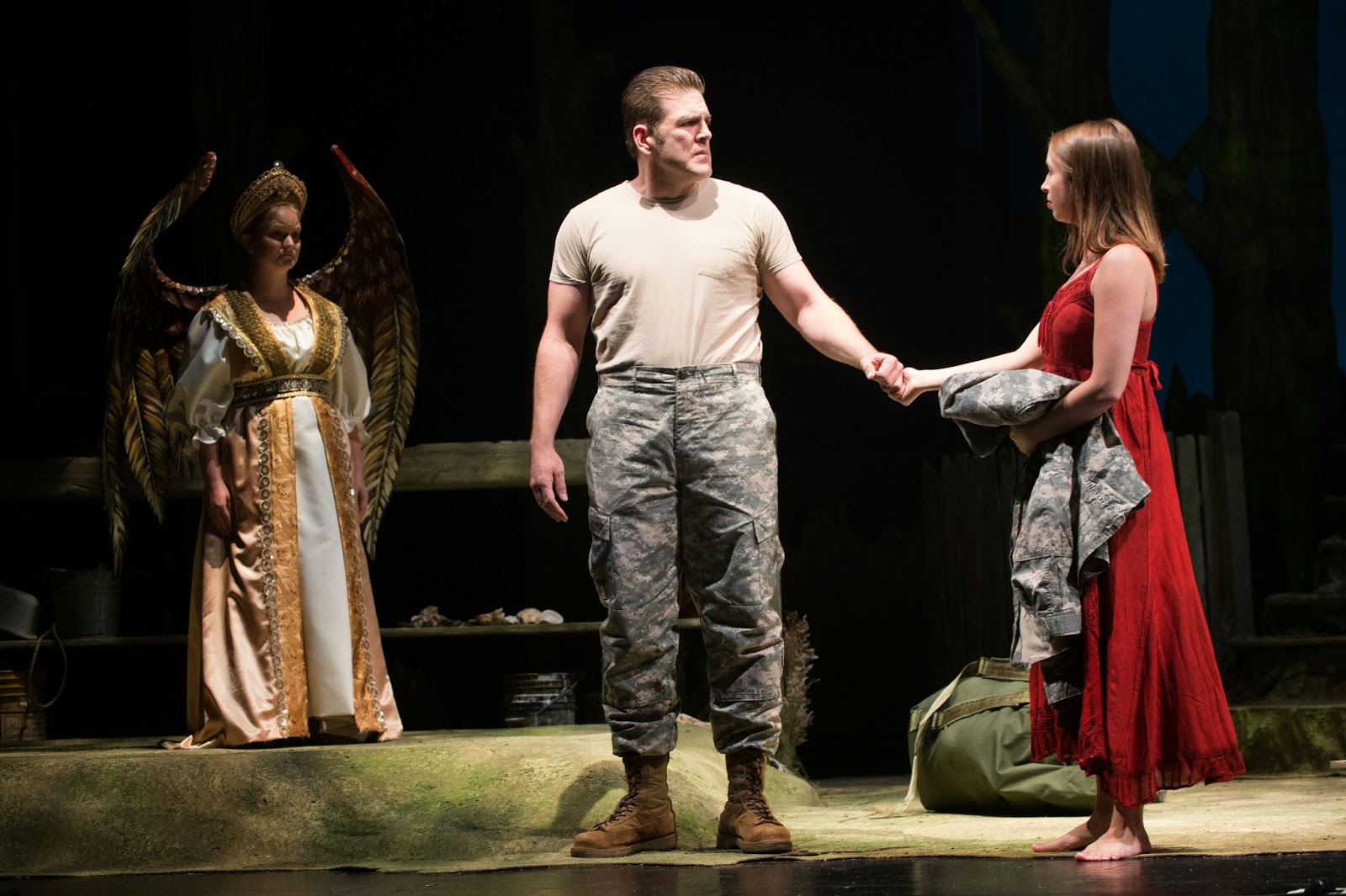