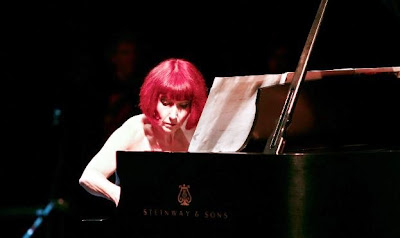 The piano did not explode, but Kathleen Supové did create some new sonic textures at her concert last Saturday (September 6) at the Brunish Theatre. Her unusual piano recital, entitled “The Exploding Piano,” was a showcase for new music, primarily from the “Downtown School” of composers who live in New York City, and, for her concert, that meant that most of the pieces were for piano and soundtrack. The combination of electronic media and piano was fun to hear, and did expand my experience of what a piano concert could be like, but it didn’t bowl me over. I felt that the soundtrack sometimes dominated the performance and that the music, though serious at times, just wasn't transcendent.

Supové kicked off her program with “The Body of Your Dreams” by Jacob TV (Ter Veldhuis), a Dutch composer who likes to infuse some of his pieces with an aspect of popular American culture. “The Body of Your Dreams” featured snippets from commercials that sell a muscle toning belt called an Abtronic. The loud and punchy part for the piano perfectly complimented the wildly enthusiastic selections from the Abtronic commercial, which alternated between a man and a woman talking about how easy the product was to use and how it got rid of flabbiness. As the piece went on, I found myself listening more and more to the woman’s voice, especially when she exclaimed “Wow! It’s so easy!” That really made me laugh, but I forgot to listen to the piano part, which was equally vigorous.

Missy Mazzoli’s “Isabelle Eberhardt Dreams of Pianos” created a swampy, surreal sound as if the music were being played under water. The soundtrack had a vague tone that would become more penetrating and then fade away. Supové overlaid a spectrum of full chords that crashed about and complimented the soundtrack with a buildup of overtones. She seemed to be using the sustain pedal almost all of the time except when she played a fragment from Schubert’s Sonata in A major. The piece ended in a somber and understated way that was poignant, especially in regards to Eberhardt’s death at the age of 27 during a flood in the wilderness of North Africa.

The two piano miniatures by Mohammed Fairouz showed off the piano without an accompanying soundtrack. Both “Lullaby for a Chelsea Boy” and “For Syria” had a wistful quality, although the latter was more solemn. Neither piece struck me as virtuosic in any way, but more like Mozart, in which a simple melody has to sound natural and free. Supové conveyed that feeling very well.

Just before intermission, Supové played Randall Woolf’s “What Remains of a Rembrandt,” which came across as an intellectual and abstract piece. Its soundtrack began with a vague and drifting tone that gave the sense of something falling apart. Sporadic thuds and sparse sounds from the piano accented the wash of the soundtrack before things shifted to a rhythmic section with a rolling piano part and blipping sounds from the soundtrack. This transitioned into a shimmery keyboard segment with lots of overtones then a helter skelter break that dissolved into abruptness and jamming, slamming chords. The final section of this piece returned to something like the drifting soundtrack that was at the beginning of the piece and an equally drifting passage for the piano, creating a sense of slow motion.

After intermission came parts 3 and 4 from Annie Gosfield’s “Shattered Apparitions of the Western Wind.” This soundtrack contained a recording of Hurricane Sandy as well as sounds that had had an eerie hollowness and some that were very piercing. The piano part, based on Debussy’s prelude “What the West Wind Saw,” accompanied the wind-blown background extremely well.

Supové played with like precision during “Ever Just As Sure” from “Disney Remixes” by Matt Marks. The piece, inspired by Bach as well as some famous Disney tunes, started out simply and became very complex at the end. I didn’t catch the movie themes, but the piece had an appealing, carefree attitude.

It was difficult to tell which tones came from the piano and which came from the soundtrack in Carolyn Yarnell’s “The Same Sky,” but the music generated several exciting moments when it became nervous and faster. Some segments gave the impression of many tiny bells echoing about. Intriguing also were the changes in volume and harmonics. There was a lot going on in the sky of this music.

As an encore, Supové teamed up with violinist Kenji Bunch to play the first set of Randall Woolf’s Anti-Fragile Études.” This piece had an improvisation aspect that both performers played with verve. Together they knotted together several dystopian riffs that included half-tone glissandos, pizzicato strumming, and something like ricochets by Bunch. The piece brought down the house.

This concert was Supové’s professional debut in Portland. She was born and raised here before studying music in California and later in New York City where she built her career. There were around a hundred people in attendance but very few college students. Perhaps this was because Portland State has not opened yet. It would have been interesting to get their take on the concert, and if they saw piano music moving in this direction.
Posted by James Bash at 5:03 PM