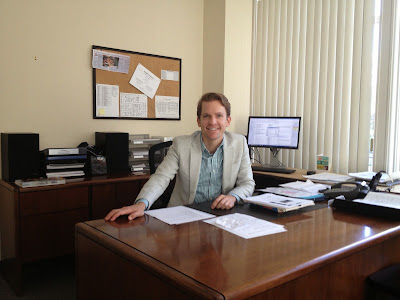 Last May, the Oregon Symphony announced that Scott Showalter would become the orchestra’s President and CEO. Showalter, who is 41 years old, brings an impressive resume with him. He is a classically trained pianist who received his undergraduate dual degree in Economics and German Studies from Stanford University and an MBA from the University of California, Los Angeles. He has served as the Vice President for Development of the Los Angeles Philharmonic Association, the Associate Vice President of Alumni Relations and Development of the University of Chicago, and the Associate Dean for External Relations of Stanford Law School. Earlier this week, it was announced that Showalter will be participating Chief Executive Program: Community and Culture that is offered by National Arts Strategies, an acclaimed nonprofit organization for leaders in the arts.

I met with Showalter a couple of weeks ago at his office and asked him a few questions. Here is our conversation.

Why did you leave the LA Phil, Dudamel, Disney Hall, and huge budget and endowment to come and take over the Oregon Symphony?

Showalter: I’ve been in development for 20 years, and I’ve loved the work that I’ve done in higher ed and the arts. Coming to the Oregon Symphony has been an opportunity, albeit at a smaller institution but with a broader vision, to make a real difference. The product on stage at the LA Phil is superb. The budget and endowment are tops. It was excellent place for me to get my artistic professional start. Because I am a classically trained pianist and a music lover at heart, it was a natural transition to go from higher ed nonprofit administration to the LA Phil. Now in coming to Portland, it’s a chance to make a difference in a community that has an exceptional artistic product, but doesn’t have the funding. For me, as a leader, this is the real energy. With more resources we can do bigger and better things.

I wouldn’t have come to Portland if Carlos and the musicians weren’t already at a high level. Now it’s a matter of marshaling the resources and creating the vision to get people who are buying tickets excited and the people making donations excited.

Yes, there’s more opportunity to raise donations, but it’s not a matter of hiring the right fundraiser and putting him or her in the corner office and expect them to deliver. There’s opportunity on the earned revenue side of the house to sell the quality of what we are doing and the purpose of what we are doing. Why these concerts should matter. Why this music should interest the community. Why it’s not so intimidating to come to the Schnitz and hear Bach and Beethoven. I’ve been spending a preponderance of my time out in the community, meeting with arts leaders, the board, donors, patrons, and the general public.

There’s more art events being offered than ever before, and a lot of groups have increased the number of performances. That creates a very crowded field. So your effort will not be easy.

Showalter: The difference is between looking at the pool of resources as fixed versus expansive. If you assume that the greater Portland community can give only this much pie, then it’s a zero sum game. But I would argue that the pie with more product and interested patrons is bigger than we might have once considered – even in Portland. It wasn’t all that long ago that the LA Phil itself was in similar position. It needed more funds. That was before moving into Disney Hall, and expanding their programs, and developing the Hollywood Bowl in a new way. That orchestra didn’t have the sure financial footing that it has today.

It’s not that Portland is any less of a city or any less worthy. It’s just at a different stage of its development. There’s a lot of opportunity as I see it.

I know that the marketing of the performances is a tricky thing.

Showalter: We are being creative about that. Jim Fullan our Vice President of Communications, Marketing and Sales, and I talk about how to get the word out through new channels. Carlos and I, a couple of weeks ago, were at the Hillsboro Hops game. He conducted a group of adult marching band musicians in the “Star Spangled Banner” and then again during the seventh inning stretch. We were up on the big screen and got some good press coverage. It was a new way to get Carlos’s face out in the community. Tonight I’m going to the OHSU gala at the invitation of one of our donors to promote an auction item on behalf of OHSU that will garner attention. There are many ways to get out the message.

The expansion of the Waterfront Concert into an all-day event is part of this. Our thought, when I talked to the mayor about the concert, is that the grant we received is not about the Oregon Symphony. It costs a lot of money to put on that event, there’s cleaning up after dogs and geese, permitting the big stage that takes four days to set up, the sound system, the musicians… we thought that this would be a terrific platform to engage our community partners. So we put on a music festival. It started in the afternoon with the 234th National Army Band of the Oregon National Guard, followed by several youth groups, Portland Taiko, Portland Opera, Oregon Ballet. Of course, the Oregon Symphony with the cannons and the fireworks provided the grand finale, but the grant gave us the chance to convene a music festival, and that was a great way to give back to the community.

Your predecessor, Elaine Calder, was noted for coming out on the stage at Oregon Symphony concerts and introducing the orchestra to the audience. Do you plan on doing that?

Showalter: I do! I plan to do that for every classical concert and many of the specials. It’s a great way to put a face on the organization and brag about the orchestra.

Speaking of specials, I’ve got a couple of friends who think that the orchestra is relying too much on popular artists. They want the orchestra to play more new, serious music.

Showalter: We would love to do more new music and help to advance the art form that is classical music. We just need more money. Just to wax philosophical for a moment – as a general rule, people buy tickets to music that they know. So, anything that is new – a commission or a piece that they’ve never heard before – makes people reluctant to buy tickets. If you are in a position where you have to squeeze every last dollar out of every of performance, then you don’t have the luxury to do it for the good of the art form, because you have to sell out the hall. On the other hand, if we are not doing new music, this art form dies. Music has been evolving for hundreds of years. At one point Beethoven was new, and Mahler was new. We want to build to new serious music. It’s just going to take more money.

Are things working well with Carlos?

I’m also enjoying going to rehearsals and meeting the musicians. I stuck around for most of the rehearsal at the Waterfront. I’ll be hearing them at our concerts, and at concerts around town. I recently heard our concertmaster Sarah Kwak play at All Classical FM. That was fun.

How did you even hear about this job?

Showalter: Thomas Lauderdale is a good friend of a good friend of mine. Pink Martini performed at the Hollywood Bowl a little over a year ago, and that was when I met Norman Leyden for the first time. He was giving his Bowl debut. Because of the mutual friend who was at the concert serendipitously – he doesn’t live in LA or Portland, I got to be friends with Thomas and the band for the three nights that they were performing at the Bowl. Since I was vice president of development, I was backstage a lot at the Bowl. It wasn’t long after that that Thomas was encouraging me to consider coming to Portland. It took many months of discussion, but it all worked out.

Now that you’ve been in Portland for a little while, have you made any surprising discoveries?

Showalter: The most surprising and heartening thing that I found is how receptive other arts leaders are to my presence. In other cities you might find the opera and the orchestra are a bit competitive, or the art museum and the performing arts world try as much as possible to distinguish themselves to retain board members and our donor base. Here I’m finding that from Portland Center Stage to the Art Museum to OBT to the Opera… everyone is welcoming me with open arms, introducing me to their patrons and board members and thinking about what it means to collaborate. That’s pretty unique. I didn’t expect that.

I’m an avid cyclist. I’ve been getting out and exploring the hills around Portland. I’m a climber; so I’ve been enjoying how easy it is to get to the hills right outside my door on the West side of town.

I’m a beer connoisseur. So I’m in beer mecca here.

But you don’t have the beer gut!

Showalter: That’s the only reason I cycle! So that I can drink more beer. [Laughs!] I love coffee too. I just downed my third cup. I love the culinary scene here.

The environment, culture, and allure of Portland means that it is on the upswing. It’s great to be here and have this opportunity.
Posted by James Bash at 12:19 AM

Thanks for the interview, James. Let's hope Showalter can lead the orchestra toward a more secure future.