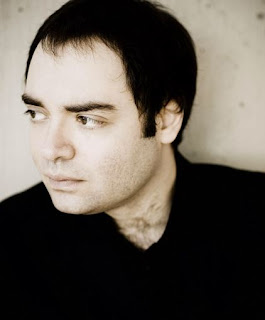 Russian pianist Alexander Melnikov will be making his debut appearance in two concerts this weekend sponsored by Portland Piano International. Since winning the International Robert Schumann Competition in Zwickau in 1989 and the Concours Musical Reine Elisabeth in Brussels in 1991, Melnikov has enjoyed an international career that has included numerous recordings. His recording of Shostakovich's "24 Preludes and Fugues" received the BBC Music Magazine Award, the Choc de Classica and the Jahrespreis der Deutschen Schallplattenkritik. Topping that off, in 2011, BBC Music Magazine listed that album as one of the “50 Greatest Recordings of All Time.”

It so happens that Shostakovich's "24 Preludes and Fugues" will be the focal point of Melnikov's performances in Portland on September 26th and 27th at 4 pm at Lincoln Hall. Shostakovitch wrote this work after serving on the judging panel for the first International Johann Sebastian Bach Competition in Leipzig, Germany, in 1950. He was so impressed with the 48 preludes and fugues of Bach's "The Well-Tempered Clavier" and with the competition's gold medal winner, Tatiana Nikolayeva that after returning to Moscow, he wrote the "24 Preludes and Fugues" very quickly. Nikolayeva premiered the work in Leningrad in December of 1952 and went on to record the complete set at least three times.

I sent some questions to Melnikov via email. Here is our exchange (edited for brevity):

How long did it take you to learn all of Shostakovich's "Preludes and Fugues?" Do you have a photographic memory?

Melnikov:  I played four of the Preludes and Fugues many years ago, around 1996 or 1997. Already back then I started playing with the idea of learning more. The rest I have learned for the recording, in two installments, I don't remember exactly how long it took me, over a year I think, but I was combining it with many other things I was doing. No, I don't have a photographic memory and (except those four in 1997) I have never performed the cycle by heart. During the recording I tried it (playing by heart) once at home - I could do it, but I would be never able to do it on stage, and even if I did I would have to concentrate so much on the memory issues that I would not be able to even start making sense of the music

Melnikov: This is a bit of the "dancing about architecture" question. But, yes, I find it one of the most important polyphonic works of the 20th century, and I find it simply fascinating how many characters emotions colours and stories Shostakovich could cram into this very rigid and dogmatic model he has chosen for himself.

Shostakovich dedicated this work to pianist Tatiana Nikolayeva, who recorded these pieces several times. Did you try to find an interpretation that differs from hers?

Melnikov: No it was never ever the case that i tried to be different, or even tried "to find an interpretation. I am always trying (with sometimes lesser sometimes bigger success) to try to understand the composer's musical language, and to convey it with minimal losses. That's all there is to it, really. I have respect for Nikolayeva's recordings, and many others too.

Do you have any advice for pianists who are trying to learn this music? Is it best to learn the first one and proceed to learn them in order?

Melnikov: It depends. If they want to learn the whole thing - I would start with the hardest ones, but learning the entire cycle should never become a goal in itself. Otherwise I find the most natural way to start with the ones which are most appealing, but that goes of course for any music.

What is your next recording project?

Melnikov: Prokofiev solo sonatas on modern piano and Mozart violin sonatas with Isabelle Faust on historic. There are also couple of things already recorded but not yet released, not least 4-hands fortepiano Schubert CD with Andreas Staier...

While you are in Portland, will you have a time to travel or see anything in the city? Or visit the Pacific Ocean?

Melnikov: I very much hope so. So far my knowledge about Portland is Wikipedia limited, but I already love it - beer, roses, steam engines, direct democracy, and "keep it weird" - things don't get much better, do they?
Posted by James Bash at 5:13 PM