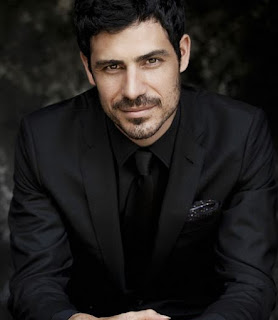 A festive mood swirled in the air at the Oregon Symphony’s gala concert, enhanced by many of the female orchestra members wearing colorful dresses and a concert program devoted to Spanish-influenced music, including two concertos that featured guitarist Pablo Villegas. Led by Music Director Carlos Kalmar, the musicians played works by Paul Dukas, John Corigliano, Joaquín Rodrigo, and Maurice Ravel. The Corrigliano piece was a curious choice for closing out the first half of the concert because it closed on a quiet note, but it only temporarily dampened the celebratory atmosphere on Saturday evening (September 12th) at the very full Arlene Schnitzer Concert Hall.

Written for solo guitar and chamber orchestra, Corigliano’s “Troubadours” was the subtlest of pieces. It had some of the quietest passages that I have ever heard, especially for the off-stage ensemble which sounded incredible distant at times – as if they were playing from a street two blocks away. Sometimes naked notes slid eerily and very slowly from one tone to the next, creating a sense of decompression. Villegas played incredibly cleanly, executing wild runs with gusto and slower passages with equal intensity. Duets between Villegas and Principal Flutist Alicia DiDonato Paulsen were exquisite as were the combinations between the Villegas and the strings with Concertmaster Sarah Kwak’s gentle solo on the tip top.

While “Troubadours” did evoke the image of a medieval poet-musician wandering into town and out into the countryside (or into the “clouds of memory” as Corigliano noted), it didn’t have any catchy melodies. Villegas and the orchestra made up for that with Rodrigo’s “Fantasia para un gentilhombre” (“Fantasia for a Nobleman”), which is one of the most popular concertos for guitar and orchestra ever written. The piece was superbly played by Villegas and the orchestra – with particular attention paid to the tonal blend between all forces so that the soloist could always be heard. In the last movement, “Canario,” Villegas cajoled a playful sound from his guitar that brought the audience to its feet with applause. He followed the ovation with a carefree encore “Tango en Skäi” by Roland Dyens.

The concert began with the Dukas’s “Fanfare to La Péri” and “La Péri, poème dansé.” The fanfare, brilliantly executed by the horns and brass section, contained some wonderfully engaging harmonics – even through the staccato passages. In “La Péri,” the orchestra laid out a lush, sonic fairyland. Creating a heightened sense of enchantment was the melodic line of the first violins against the subdued cellos and basses. Adding to the magic were swirls of sound from the entire ensemble and the trickle-down phrases of the flute (DiDonato Paulsen) and piccolo (Zachariah Galatis). It all ended gracefully with the horns guiding the sound into oblivion.

James, is Paulsen the permanent principal flute? Also, has Nakao retired as principal clarinet? Thanks.

Hi Curtis,
My understanding is that Paulsen is just filling in as the principal. She was trained to be the assistant to the principal, and has been focused on that. However, under the present circumstances, she's doing the heavy lifting. The OSO is lucky to have someone so accomplished, and, as you know, she has done the principal work before.

Yes, Nakao retired earlier this summer. He was always a stellar principal flutist. I put in a notice about his retirement in early July.