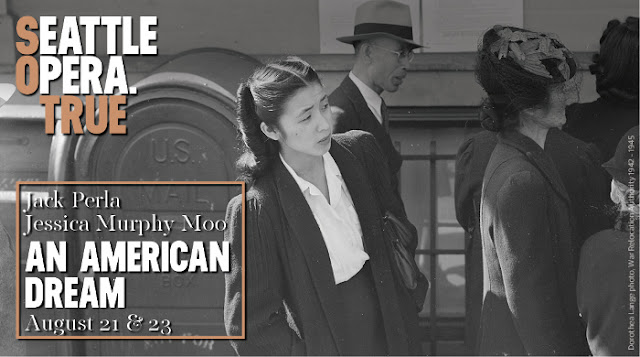 NOTE: This article was supposed to be published at another site and was not. The opera reviewed was performed at 8pm on August 21 2015. Apologies for the untimeliness of the post

The world premiere of Seattle Opera’s An American Dream, by composer Jack Perla and librettist Jessica Murphy Moo, was more than a traditional opera. It was a multimedia experience, beginning with audience members being ‘processed’ for entry to the self-guided tour, behind fake (but convincing) barbed wire and surrounded by dour-faced, pacing guards in dark glasses, who responded to queries with succinct, disinterested and well-rehearsed phrases.

An attempt to impart something of the experience of Japanese Americans incarcerated by the U.S. Government starting in 1942 and lasting the duration of the war, the exhibits actually traced the lineage of racist anti-Asian laws passed by various governments in the U.S. beginning in the late 18th century, and culminating with the incarceration of Japanese Americans at the start of the second world war. By the time the music started, the exhibits had served their purpose admirably, creating a heightened sense of expectation of the performance to come.

The set was spare—a few household furnishings set against a backdrop of cavernous emptiness. As the overture played, projections onto the emptiness began to unfold: a splash of ink across the dark, dragonflies winging across the water. Perla’s score here was atonal yet pastoral at times. The video projections, while beautiful, tended to distract from the action onstage. The overture itself felt overly long for such a short opera (about one hour 7 minutes.)

The scene opens with the Kobayashi family hastily sorting through paperwork, looking for anything that a suspicious US government might use against them. In a powerful trio, the family voice their private regrets in starkly haunting melodies as they prepare to be forced from their home. There is a sense of time running out as Papa (Makoto Kobayashi, sung by bass Adam Lau) begins negotiating with American vet Jim Crowley (baritone Morgan Smith) over the sale of the Kobayashi home. Crowley’s wife Eva (soprano D’Ana Lombard) gushes over the beautiful farmstead, while her husband negotiates in bad faith with Kobayashi, knowing he has them over a barrel and explicitly stating that there is no time to negotiate before the government comes. Reluctantly, Kobayashi agrees to sell the farm at a huge loss.

Setsuko Kobayashi, the daughter (sung by soprano Hae Ji Chang) hides her beloved doll under the floorboards in her room, singing a moving lullaby to the ‘Empress’ as she calls the doll. As the FBI arrives to arrest Mr. Kobayashi away for possessing dynamite (which he had once used to remove stumps) the home passes to the Crowleys.

After a brief light moment when the new couple moves in, Eva, a German Jew whose friends and family were not so fortunate to escape Hitler’s Europe as she had, begins to piece together just what happened to the Kobayashis and how her husband procured their new home, the darkness returns, and stays.  Lombard’s performance was particularly compelling: her lush, dark timbre and convincing acting spoke volumes as to the emotional import of the work. When she discovers Setsuko’s doll and finally understands what happened, the comparisons between the racial cleansing happening in Europe and America begin. Her husband Jim angrily says ‘we don’t murder the innocent here,’ and while there is an understanding that the detention centers in America are far different than the concentration camps in Europe in both design and purpose, the image hangs like a shameful question mark. If we don’t murder the innocent here, just what do we do to them and with what justification? Given the travesties and disparities in  the current American judicial system and culture at large vis-à-vis race, the topic is still disturbingly current.

As Mama (Hiroko) Kobayashi ails in the detention center, Setsuko attempts to cheer her up, trying to envision what her father might say, lying to her mother. This leads to a trio between Chang, Lau and a cello, as Setsuko imagines her father standing next to her, telling her what to say to comfort her mother.

In the final scene, as Jim is confronted by his shame when Setsuko returns to their former home to meet her father, all the threads come together. Chang sings ‘I have nothing—don’t you recognize me?’ She is no longer the child who left a doll years ago, but a young woman, defiant in the face of Jim’s suggestion that she leave, and Eva finally learns the fate of her family in Europe. They have all been killed.

All of the vocal performances were fine—in particular Chang and Lombard. Their acting most especially drove the story forward, and exposed the ugly truths behind the similarities to be found in racial hatred no matter where it lies. Perla’s score and Moo’s libretto were up to the task of imparting this powerfully disturbing message—appropriate in tone and timbre, yet not so heavy as to labor the point in any way. Though the through-composed score read (fittingly) like a threnody from beginning to end, with an almost perpetual eeriness, it was lively and varied at times--there was a moment of domestic levity as the Crowleys lament the dusty, hard work of moving, a light moment that drew the audience in—who can’t relate to that?

The entire experience, from the exhibits at the beginning to Setsuko’s final reunion with her father at a home that is no longer theirs, Mrs. Kobayashi having died from grief while in detention, was incredibly moving, an experience that will not soon be forgotten. Seattle Opera plans to take the performance on the road if suitable venues can be found. Hopefully they can, because this work deserves to be seen far and wide.
Posted by Lorin Wilkerson at 11:30 AM