Castorf provokes everyone at Bayreuth with his “Siegfried” 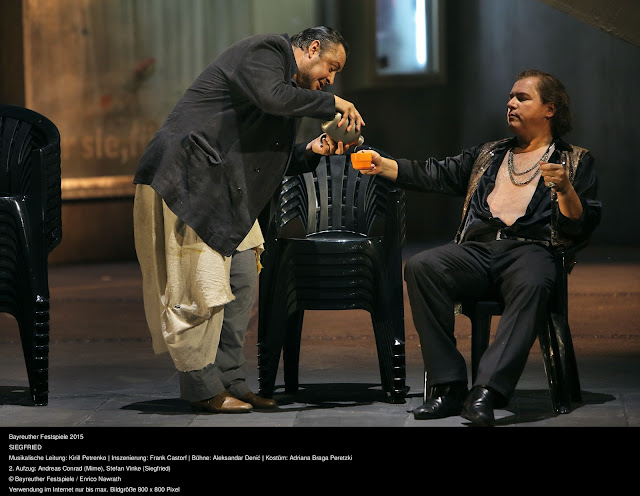 Perhaps Frank Castorf was in a bad mood when he conceived his production of “Siegfried” for the Bayreuth Festival –or he was just mischievous. In any case, his “Siegfried,” which I watched on Monday, August 24th, succeeded in provoking a thunderstorm of boos from the audience after the curtain closed on the final act. The negative reaction was most likely provoked by several scenes, including the one in which Siegfried guns down Fafner with an AK47, the sex scene between Siegfried and the Forest Bird, the fellatio scene between The Wanderer/Wotan and a prostitute who may have been Erda, and the scene in which the crocodile that eats the Forrest Bird.

Well, if that doesn’t have your mind spinning, then you may want to read the rest of this account, which goes into some detail over other oddities of Castorf’s interpretation of “Siegfried.” The heavy hitting started right away with the curtain revealing a Mount Rushmore consisting of Marx, Lenin, Stalin, and Mao instead of Washington, Jefferson, Roosevelt, and Lincoln. Their stone faces definitely anchored the story’s action in a mythical communist landscape. At one point, The Wotan's and Siegfried's faces are superimposed over Lenin's and Stalin's. That was one of the few nice touches in this production. 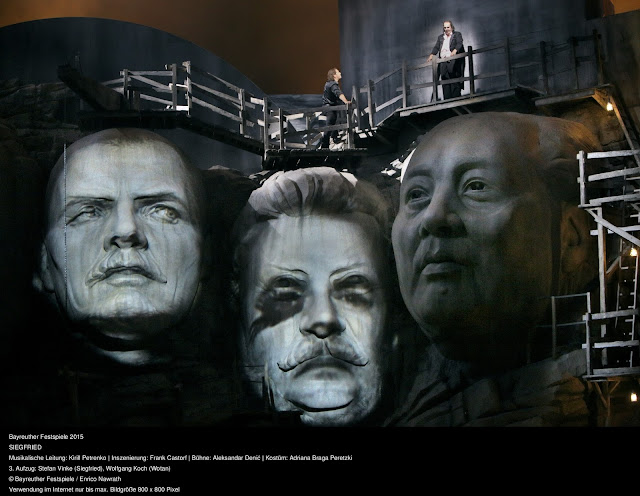 In the foreground, below the stern communist forefathers, is an old, beaten up Airstream trailer, which serves as the work station for Mime (Andreas Conrad), who futilely tries create the sword that will kill Fafner, the dragon who sits atop the horde of Rhine gold. His mutterings and sputterings are interrupted by Siegfried (Stefan Vinke) who immediately flings a couple of lawn chairs and camping tables over the disheveled area. Siegfried also brings a bear, which is usually a humorous moment, but the bear in this production is a human being, and after briefly clowning around, the bear/man sets down and smears oil all over his head and upper torso. Later, after he has cleaned up a bit, he enters the trailer and eats and drinks snacks. He also reads books and gets in a bucket-lift that takes him up close to Marx, where he proceeds to clean Marx’s nose with a broom. 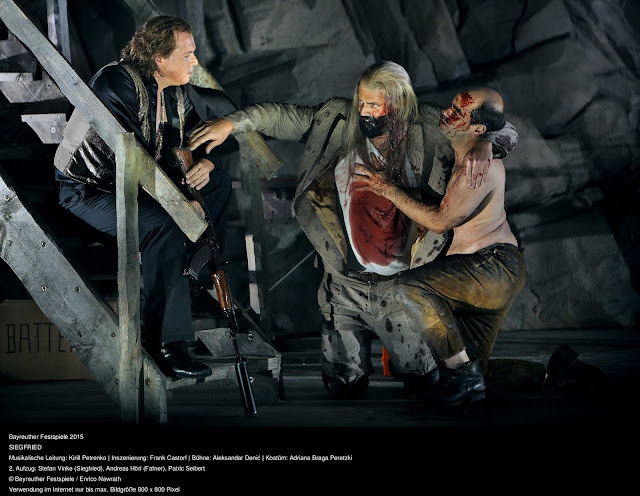 The Wanderer (Wolfgang Koch) walks next to the trailer while Mime climbs the scaffolding that goes up and around the communist Mt Rushmore. Both men sing primarily to the audience rather than to each other, and consequently the tension in the question/answer scene is totally destroyed.

In the second act, a screen shows the upper torso and head of Fafner with his fist raised in a mildly threatening way. Alberich (Albert Dohman) pastes some newspaper pages on the side of the trailer and later polishes Lenin a bit. The stage then rotates to show Alexander Platz, which is a square in the former East Berlin that has a huge TV tower. (The tower is still the tallest building in Germany.) 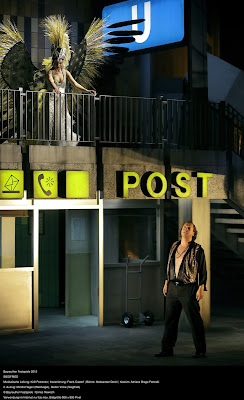 Fafner (Andreas Hörl) strolls into Alexander Platz with three women who are gaga over the jewelry that he has given them. Together they wander out of the square before Siegfried arrives. He plays footsie with the Forest Bird (Mirella Hagen), who takes a keen interest in him to the point that she tries to seduce him. The Forrest Bird is decked out in a huge, Las Vegas showgirl costume (interestingly enough, there was a popular revue in East Berlin that lots of showgirls). Fafner returns to the square where he encounters Siegfried, and Siegfried kills him with the machine gun (a very loud blast that obliterates any sound from the orchestra). Siegfried tastes some of Fafner’s blood that splattered onto the barrel of gun, and that enables him to understand the Forest Bird. She warns him about Mime’s intentions. Siegfired then kills Mime and empties a trash can on him.

The third act opens with The Wanderer/Wotan and Erda (Nadine Weissmann) drinking heavily on a big screen. In Alexander Platz, Siegfried copulates with the Forest Bird. After they leave, Wotan and Erda, who is wearing a tight dress, eat spaghetti in a vulgar way and argue until Erda leaves in a huff. She goes inside a building where she changes to a blonde wig (shown on the big screen). She then returns to Wotan and while he sings a long soliloquy, she services him while the waiter comes out to give Wotan a bill for the food and drink. Wotan doesn’t even look at the bill and he doesn’t bother to tuck in his shirt either. He shoves Erda aside and leaves, and the waiter then tries to collect from Erda, who angrily flips him the bird.

Siegfried returns to Alexander Platz where he removes a big, crumpled, sheet of plastic to find Brünnhilde (Catherine Foster). They sing of their love for each other but never look at each other or embrace. Four crocodiles (a male and female and two offspring) crawl into the scene, and one of the crocks swallows the Forest Bird so that only her heels are showing. Lucky for her, Siegfried pulls her out. 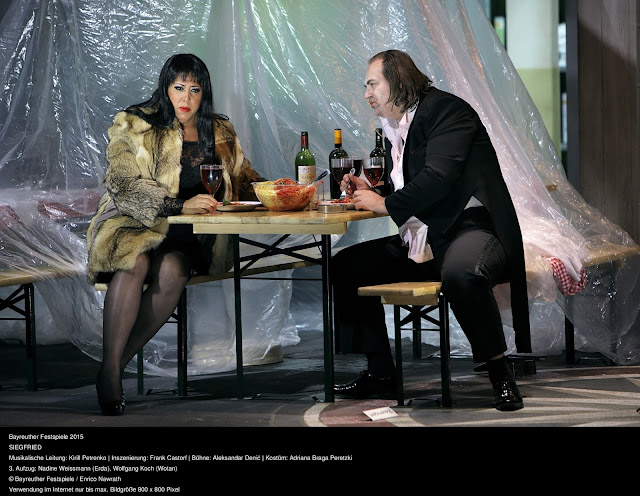 Immediately after the curtain closed, the booing began and didn’t let up until the singers appeared. Vinke sang with unbelievable strength, but he was unable to show off his lyrical side. Foster also had plenty of power. I don't know how Koch was able to sing while Weissman put his finger in her mouth and pulled out his shirt, but he was terrific. Conrad sang with plenty of gusto and could delve into rawness at the drop of hat. Dohman was dark and subdued. Hörl exuded a wonderful dark timber as did Weissmann. Hats off to Mirabella Hagen for singing with clarity and grace despite having to run all over the place in a cumbersome costume.

The sex and the reptiles did nothing to enhance this production. Instead, it detracted from the music and the story. Overall, Castorf seemed to thumb his nose at the whole enterprise in an effort to be remembered as the grand provocateur. Fortunately, the music still carried the day, and once again the singers were rewarded with tons of applause and cheers , and the Bayreuth Festival Orchestra and its conductor, Kirill Petrenko got the most acclaim. 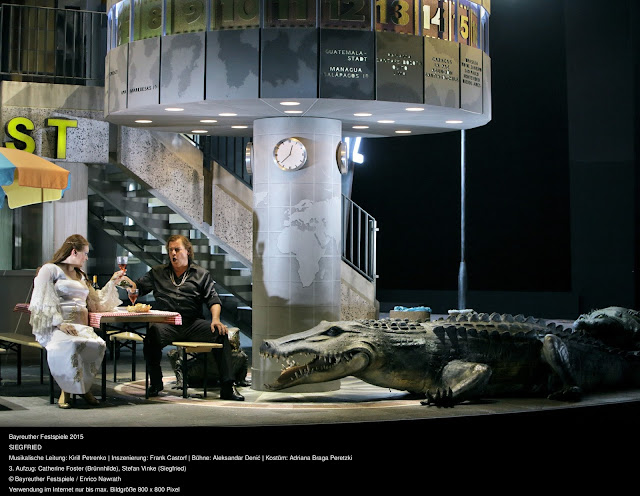