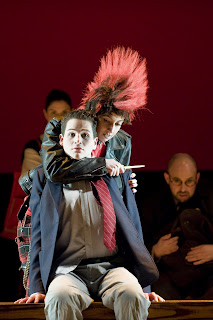 The Seattle Opera presented two one-act operas at the intimate Meydenbauer Center Theater in Bellevue, WA on Saturday March 29th. The third installment of Puccini’s famed one-act triptych, Gianni Schicchi followed a whimsical rendition of Ravel’s L’enfant et les sortileges, translated as "The Enchanted Child." This was a presentation of the Seattle Opera’s Young Artists Program, which closes out its run with performances on April 4, 5, and 6.

The productions were nicely balanced, pairing a lesser-known work with a beloved favorite. Director Peter Kazaras chose modern settings for both pieces. L’enfant was the opener, and the plot follows The Child as he throws a tantrum, destroying toys and other objects, and is later confronted with his caprice by the items come-to-life. The child awakens in the garden and is attacked by animals who also resent his behavior. At the end he comes to feel empathy and is then reconciled with Mother.

With this bare-bones plot and character names like The Child, Fire, Squirrel, and Chinese Teacup, it seemed as though Ravel used this work as a chance to revel in a child’s psychotropic dream. This rendition of Ravel’s music featured an orchestral reduction by Didier Puntos, consisting of piano, cello and several flutes that fit perfectly with the stripped-down strangeness of the story.

The evening began with the silhouettes of riders waiting at a transit station as the piano utters an eerie pentatonic perambulation, interrupted here and there by ghostly sul ponticello wails from the cello. A boy wandered through the crowd, laughing and leading a girl who had a giant squirrel’s head perched atop her shoulders. David Korn, a male soprano who sang the title role, did a good job with what had to be a difficult role to act, given the unusual nature of the plot. It required leaping, dancing, falling and being hurled to the floor, and he delivered nicely. His soprano was very pure, even down near the break, which is a difficult place for the male loft-voice to maintain clarity.

For me however, the show was stolen by soprano Ani Maldijan, who did triple duty as Feu (Fire), Princesse, and Rossignol. In her first appearance, as the Fire, Maldijan burst onstage in a magnificent punk ensemble, complete with studded leather jacket and an enormous, fire-engine-red Mohawk. As she berated the terrified Child following his tantrum, explaining her duty to punish and consume those who are wicked or selfish, Maldijan sang an intricate, difficult coloratura aria with precision. Later on she reappeared as the Princess from the Child’s dream of the previous evening, giving a curiously sensuous performance that was subtle and captivating. At this point the Child began to reflect on the consequences of his actions, and Korn sang the haunting aria Toi, le coeur de la rose with sincerity. Also worth noting was tenor Marcus Shelton as the Petit Viellard. He delivered a hilarious aria as the torn math book tormenting the Child with mind-numbing arithmetic.

From the man who leapt across the back of the stage like a gigantic frog to the screaming punk-rock fire spirit and the pair of cats that sang a "meow" duet, L’enfant was a journey into the surreal. There were some problems with the captioning near the beginning, as the translation for the entire arietta sung by the Tasse Chinoise was missing. A number of rapid and imaginative set changes took place seamlessly in full view of the audience, and this moved the story along quickly from one odd scene to the next. My teenage son who attended with me said, ‘It reminds me of something from The Muppet Show—but gone dark.’ I’m not sure I can put it better than that. What could easily have been weird and staid instead came off as quirky and engaging. This piece was all about atmosphere, and both the production staff and performing ensemble understood that keenly.

Gianni Schicchi is a work of high comedy, and Kazaras decided to take it to the slapstick level, which came off marvelously. The audience erupted in sidesplitting laughter all throughout the second half of the evening. I got the sense that having budding young opera singers perform this work added to its light-heartedness; it would be hard for someone who took themselves too seriously to thrive in the goofball atmosphere of this production. There was real chemistry and pinpoint timing between the cast members, all of which added to the overall hilarity.

Despite the modern setting, the Romantic opulence of Buoso Donati’s chamber gave the production a feeling of fin-de-siecle nostalgia. The work opens with povero Buoso on his deathbed, surrounded by his greedy and scheming family. We are treated to several impassioned Latinate family moments, delivered cleverly without dialogue, before Buoso unceremoniously croaks, drops to the floor, and the galloping introduction pours from the orchestra pit. The ceaseless parlando of the first few minutes as the relatives frantically search for Buoso’s will leaves ample room for interaction between the characters, and in this production everything from room-destroying tantrums to lascivious groping to barely-averted brawls marked the opening sequence as the family members came to discover their disinheritance.

Tenor Marcus Shelton shone as Rinuccio, and he brought the house down early with a bold Salvati! Salvati!, sung with unfeigned brashness as a besotted youngster blind to all but his beloved. Soprano Margaret Gawrysiak acted the scowling, matronly Zita to a tee.

When Joshua Jeremiah finally appeared onstage as Gianni Schicchi in his wiseguy tracksuit, black shades and slicked-back hair he elicited peals of laughter, looking more like one of The Sopranos than a Puccini-singing baritone. Ani Maldijan was Rinuccio’s inamorata Lauretta, who attempts to convince her father Schicchi to help her marry her sweetheart. Maldijan rendered the iconic aria O, mio babbino caro with as much breathless, swooning intensity as one could hope for, and yet at the same time took pains to make sure that it sounded light and in keeping with the overall timbre of the presentation.

I couldn’t help but think of Weekend at Bernie’s as poor, deceased Buoso, now in Schicchi’s outfit, sat propped up between his relatives on the couch while Schicchi lay in bed and attempted to convince the notary that he was in fact a living Buoso who needed to change his will. Despite the appropriate silliness of his performance Jeremiah did a convincing job of playing the conniving opportunist Schicchi, and sang with a rich and colorful baritone, which was a pleasure to hear. Bass Michael McGee sang wonderfully as the notary; he and Jeremiah swapped roles throughout this run, and I truly longed to hear more of his voice. Kudos also to Leena Chopra; with her leopard print mini-dress, red tights and stilettos she kept the audience in stitches as a frowsy Ciesca.

Peter Kazaras delivered two great numbers at the Meydenbauer center, and the audience was alive and engaged all evening. I was very impressed with Daniel Urlie’s costume design in both works; they called for imagination and intuition, and he showed both. The singers were sometimes drowned out by the orchestra in Gianni Schicchi, but the playing was impressive otherwise. All in all, it was a night of strange dreams, silliness and rollicking fun, and the one fact which was patently obvious was that everyone was having a blast.
Posted by James Bash at 2:36 PM

It sounds like you are describing the cast from Saturday the 29th of March. That being the case, Marcus Shelton was Rinuccio, not Noah Baetge as you stated in your review.

yes that's true! it was marcus on saturday, not noah. i wrote justina about it. someone should correct it, but all things considered it's a great review!

You are correct Marcus; I misread the program. Rinuccio was sung by Marcus Shelton on the March 29th performance. Sorry for the mistake.

Thanks Marcus and Megan! Lorin reread his program, and we've made the correction.

My guess is that the translation of the tasse's aria was left out purposely as it is mostly nonsense words.