Portland Festival Symphony - off leash orchestra in the parks 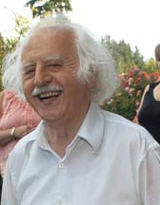 Starting this Wednesday (Aug. 30) at Peninsula Park, the Portland Festival Symphony begins its 28th season of free concerts. Over the next few weeks (plus one date in September) this orchestra will perform in seven concerts in six public parks, including Laurelhurst Park, Washington Park, Foothills Park, Grant Park, and Cathedral Park. The acoustics may not be the best, but the ambience is terrific and the price is dirt cheap because it’s free. You can bring a picnic lunch, your kids, your dogs, and stay as long as you want. The concert program varies a bit at each performance, but Haydn’s “Toy Symphony” with participation for the children is always on the program and offers a fun way to introduce kids to music. (For the complete program at each venue, click here.)

The Portland Festival Symphony is the brainchild of Lajos Balogh, a Hungarian violinist who came to the United States in 1967 and began teaching at Marylhurst University that same year. For 27 years, Balogh was the principal second violinist of the Oregon Symphony. Balogh is the founder and music director of the Metropolitan Youth Symphony and continues to teach music at Marylhurst.

I talked with Balogh over the phone recently about his summer orchestra.

Why did you start the Portland Festival Symphony?

Balogh: I started the orchestra in 1981 when I became a US citizen. I wanted to celebrate and give something back to whole community. I had played with the opera orchestra in Washington Park and liked the setting in the amphitheater. So, I approached the city to ask for funding and got money from the city’s arts commission and some sponsors. The first concert was a huge success. According to the park bureau, 7,000 to 8,000 people attended. Afterwards I had many requests to do it again and keep it going. The Laurelhurst neighborhood wanted something. So, that’s how it began.

Who are the members of the orchestra?

Balogh: Well, the first two or three years the players came from the Oregon Symphony. Most of the musicians back then were unemployed over the summer. Now it’s some from the symphony, some from the opera orchestra, and some freelancers. All are paid union scale, and we rehearse at the union hall.

I noticed that for some of the programs, your orchestra will be playing Leroy Anderson’s “Typewriter.”

Balogh: For the Leroy Anderson piece, someone a first suggested an electronic recording of a typewriter, but I want the real thing. So, we’ll have an old-fashioned typewriter on hand and Steve Lawrence, a percussionist with the Oregon Symphony will play it. I appreciate Anderson’s music a lot. In a three or four minute timeframe, he creates something special.

We’ve got a nice set of orchestra pieces that should work well. Dvorak’s 8th Symphony is one of my favorites. It has wonderful melodies and harmonies and is very upbeat. The Johann Strauss piece is the overture to his opera “The Gypsy Baron.” Back in Hungary that opera is very popular. So it is close to home.

Also, my son, Bela, is going to conduct the Kodaly number, “Intemezzo from Hary Janos” at the concert on Sunday at Washington Park and at the last concert in Foothills Park. I gave him a recording of it when he was a little boy and he listened to it all the time. It was one of his favorite pieces.

When you aren’t conducting, what keeps you busy?

Balogh: I really enjoy playing soccer. I play two or three times a week. It keeps me in shape, and it’s mentally stimulating also. One team is coed and the other is for men over 40 years old. I get to meets a lot of different people: doctors, lawyers, airline pilots. They are nice people.
Posted by James Bash at 2:39 PM