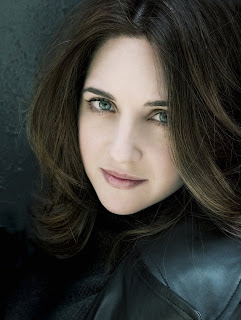 Simone Dinnerstein, a featured artist at Portland Piano International’s Summer Festival, has taken a most unusual route to become one of the hottest pianists on the planet. Just three years ago at the age of 33, Dinnerstein raised enough money to record Bach’s “Goldberg Variations” and produce a recital debut at Carnegie Hall. The resulting acclaim from the New York Times and other publications catapulted Dinnerstein into the limelight, landing her an agent and major contracts for concerts around the world.

I recently talked with Dinnerstein over the phone about her career.


It is just astounding that you to have a terrific artistic career without having won a piano competition.

Dinnerstein: I’m not the type of musician who excels in a competition setting. For a time, I thought that this would prevent me from having a career. Growing up as a pianist, I thought of winning competitions and following the regular kind of magic that happens.

Did you have a plan for all of this to happen?

Dinnerstein: Looking back on it, it looks as if I had a plan, but I didn’t. I was playing concerts a lot, and most of them were in small venues. Then I started to think that my career would continue in this sort of way, and that sort of thinking actually helped me to mature as an artist. Then I was accepted to an organization called Astral Artistic Services, which is based in Philadelphia. They help artists who are in transition between being students and having full professional careers. They wanted to present me in a big debut recital in Philadelphia. Then I found that I was pregnant. It was great but unexpected.

So, for the recital, I wanted to learn a piece of music that would be meaningful to me during my pregnancy. So I decided on the “Goldberg Variations.” After my son was born and after my recital in Philadelphia, I began to play a lot in alternative types of venues. Then I decided that I’d like to record the “Goldberg Variantions.” I raised the money for the recording from a few friends who had been supportive over the years. They all pitched in, and I made the CD, which I then sent to a few different people to get their feedback. Everyone was excited about it. Then we thought that it would be best if I played a recital of this music at Carnegie Hall. I had another sponsor who paid for the recital, and got signed by Columbia Artists Management, then a year later Telarc decided that they wanted to release the Goldberg CD, which I had originally recorded in 2005.

There are so many pianists out there. It is really hard to make a difference. But your playing has been lauded as something unique.

Dinnerstein: I think that I’m becoming more mature in my playing and try not to think of other people expectations of how something should be played. I just think about the music itself and what it means to me. Whenever I listen to other musicians who I admire, I find that they have a personal response to the music, and they have internalized the music – not necessarily following a certain tradition, but finding the way the music works for them. When I made that recording, that’s what I had in mind – how the music sounded to me.

The Telarc recording of your recital in Berlin last year will be released to the public on August 26th. How do you go about determining where or when a recording should be done?

Dinnerstein: I was scheduled to play a recital at the Berlin Philharmonie, and that’s considered one of the great concert halls of Europe. I had never played there before, but I knew that it’s an amazing acoustical space. With Berlin’s history and all, I thought that it would be a great place for a recording, especially with the fact that I was playing a program of German and American music. Telarc decided that it would be a great idea to record that recital. So the CD is of that recital in Berlin.

In that recording, you play Philip Lasser’s 12 Variations on a Chorale by J. S. Bach “Nimm von uns, Herr, du treuer Gott” (“Take from us, Lord, Thou faithful God”).

Dinnerstein: Yes, Philip’s piece is very beautiful and very deep. He has taken one of Bach’s very dark chorales. Phillip has a unique voice. You can hear strains of French impressionism in this piece. You also hear wide-open American harmonies and a little bit a jazz as well.

How did you discover Philip Lasser’s music?

Dinnerstein: I discovered him when I played a cello sonata that he wrote for my friend Zuill Bailey. We played it together, and then I met Phillip Lasser, and Phillip said that he had written these twelve variations and he gave the score and I looked at it and could tell right away that they were right up my alley. I loved them and could hear them in my head – how I would want to play them. So I started performing them about a year ago and thought that they would be perfect my recital. It’s great to have some new music in your repertoire.

Philip’s music is pretty tonal; so a lot of people can relate to it well. I just premiered set of variations that he wrote for me and a violinist. People were really involved in the music. Some contemporary music has a lack of beauty, but Philip’s is wonderful.

In your upcoming concert at the Portland Piano International Summer Festival, you will be playing some music by Aaron Copland and Anton Webern.

Dinnerstein: Yes, I’m starting the concert with an early work of Copland, his “Piano Variations,” which is from his atonal period. That piece will sound different to some people who are not familiar with this period of his music. Some of it is very jazzy and foreshadows some of the popular music that he wrote later on.

After that I play the Webern “Variations,” a short, incredibly beautiful piece. Even though it’s a 12-tone piece, it’s very romantic and it almost comes out of Brahms.

Then I’ll play Bach’s French Suite No. 5, which will be followed by the Lasser Variations, and then the Beethoven Sonata No 32, Opus 111. All in all, this is the same program that I played in Berlin, but I couldn’t fit all of the pieces on one CD, so I had to leave out the Copland and Webern. The Beethoven has a lot of dissonances in it and is very contemporary sounding. Starting with the Copland and ending with the Beethoven works very well.

How do you fit being a touring artist and a mom at the same time?

Dinnerstein: It’s very challenging, but many women in other careers have similar challenges. If I were a lawyer it could be even more challenging, every day I would be gone for most of the day. In my career, I do travel, and I might be away from home for half of the month, but then when I’m home, I’m home all the time. It’s really nice that my husband, Jeremy, and son, Adrian (who is six years old) can travel with me sometimes. My husband is a teacher at my son’s school, so they are on the same schedule. They aren’t going on this trip because I’m playing at too many places. This past mid-winter break, they came with me when I toured with the Dresden Philharmonic in Florida and Puerto Rico. That was wonderful.

When I’m at home, I practice during the day while my son is at school, then I practice again when he is asleep at night – usually from 8 to 10 in the evening. But I also volunteer at his classroom. So, I’m busy. There’s not a lot of down time. I get to rest on the airplane.

After you finish your West-coast tour, what else do you have coming up?

Dinnerstein: Later in the summer, I’m playing at the Ravinia Festival in Chicago. Then I’ll be in Germany at the Stuttgart Bach Festival, and then at Bremen Festival to play with Kristjan Järvi’s Absolut Ensemble. We are doing this thing called Bach Re-invention, which is a newly written concerto that takes Bach through several different kinds of genres. There’s a dj who is part of the orchestra, then we do a tango, then some Arabic-influenced music, but it’s all based on Bach’s inventions. I’ve never done anything like this before, and it involves improvisation, which is very new for me.

After that I’ll do my third Telarc recording. It’ll be Mozart’s Piano Concertos 21 and 23 with a fantastic new orchestra called The Knights. It’s a New York-based orchestra, and we’ll do the recording without a conductor. They are a very young and vibrant ensemble, and I’m very excited about the project. I want the concertos to sound like chamber music. One of the things about this orchestra is that they are incredibly good at listening to each other. I saw them do Beethoven’s “Pastoral Symphony” and they all knew what the other orchestra members were playing, because they were looking at each other.

I’m playing some nice recitals. I’ve got one at the Kennedy Center, another at Wigmore Hall in London, and playing at the Metropolitan Museum in New York. I’m learning Chopin’s first piano concerto for a concert with the Stuttgart Radio Symphony and Beethoven’s second with the New Jersey Symphony.

Wow, you are busy! Thanks for giving us your time!

Dinnerstein: You are most welcome. See you in Portland.

Simone Dinnerstein plays at the Portland Piano International Summer Festival on Saturday, July 19th at 7:30 pm at the World Forestry Center. Dinnerstein will also give a masterclass on July 20th at 2 pm.