Talking with Bob Priest about his festival-tribute to Messiaen 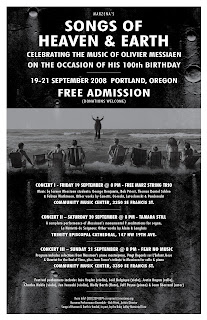 About three weeks ago, I met with Bob Priest to discuss his upcoming music festival that will celebrate Olivier Messiaen’s 100th birthday (if Messiaen were still alive today). This festival has three concerts: the first concert features the Free Marz String Trio, the second concert features organist Tamara Still, and the last concert features the Fear No Music ensemble. Priest is a composer who teaches composition at Marylhurst University. He studied composition in a class taught by Olivier Messiaen at the Paris Conservatory from 1977 to 1978.

How did this festival come about?

Priest: Originally I was going to do another regular Free Marz string concert. Then I happened to meet Tamara Still who also teaches music theory and organ at Marylhust. I was giving away my little peddle organ, and it was listed on the Marylhurst web site. She called about the organ and came over. We got to talking, and she told me that she had studied organ in Paris with the guy who replaced Olivier Messiaen – after Messean retired. It turns out that she had played Messiaen’s “La Nativite du Seigneur” on Messiaen’s organ, and she said that she would be available to play that for me at some point.

I replied how about in a few months? So we have two concerts and a festival is beginning to take shape. Tamara is a music associate at Trinity Episcopal Cathedral in Portland, and she was able to schedule her concert at the church. The big piece on that concert is Messiaen’s “La Nativite du Seigneur,” which lasts about an hour. He wrote it in 1935, and it’s a work that really established his particular music style with inter-modes, unlimited transposition, bird-like material, slow movement things and brisk toccata-like passages.

Tamara will also play a couple of other pieces that relate to French composers and WWWII. That’s where the Heroes of France title for this concert comes from. Messiaen was imprisoned during the war, because he was connected to the Resistance. Jehan Alain went into the military and was sent, in effect, on a suicide mission. Also, there’s a piece by a friend of Messiaen, Jean Langlais.

Now, I with two concerts in hand, I talked to Inés Voglar, artistic director of Fear No Music to see if they could also do a concert as part of the festival, and she agreed. So Fear No Music will do the third concert of the festival. Jeff Payne will play part of Messiaen’s “Vingt Regards sur l'Enfant-Jésus.” In a way, this concert will be a preview for Jeff Payne who is going to do the entire piece at a Fear No Music concert in November. He and Inés will play the last movement from the Messiaen’s “Quartet for the End of Time,” and cellist Justin Kagan will team up with Jeff to play Joan Tower’s tribute to Messiaen. Messiaen didn’t write a lot of chamber music, but Payne and Molly Barth will play a piece for flute and piano.

For the Free Marz String Tro concert, which begins the whole festival, I thought that I’d commission my fellow Messiaen students from the Messiaen class to write short string trios for the Free Marz trio as a tribute to his 100th birthday. Fabian Watkinson from England, Thomas Daniel Schlee from Austria, George Benjamin is on the program as well. We were all in Messiaen’s class from 1977 to 1978 and we wrote little string pieces for his 70th birthday. In the class, Jean Langlais gave us a theme – a Gregorian theme –and we all used the same theme as a point of departure and we handed Messiaen a portfolio of all these pieces that we wrote for him.

What was his reaction to that!

That was the very last year of his teaching at the Paris Conservatory. So, the Free Marz String Trio concert is called Anniversaries. This year marks Messiaen’s 100th as well as the 30th year anniversary of the students who met in his class and became friends.

So, Fabian Watkinson's string tio piece is called “Tombeau de’ Olivier Messiaen, and Thomas Daniel Schlee's piece is “Invocation.” My piece is called “Smile.” It comes from one of Messiaen’s very early songs, which is the only song he wrote on his mother’s poetry. His mother was a poet. My piece is also a sidelong glance at Brian Wilson, who used to sing with the Beach Boys.

Joël Belgique and Charles Noble will play a dazzling number by George Benjamin, who was Messiaen’s favorite student, and one of the most incredibly gifted musicians that I have ever encountered. The piece is called “Viola Viola.” It’s amazing because at times it sounds like six or seven players.

The second part of the program has a more Polish flavor. It’s Penderecki’s 70th birthday. It would’ve been Lutoslawski 95th birthday. And it is Gorecki 75th birthday, also.

Inés will be joined by Oregon Symphony concertmaster Jun Iwasaki playing two movements from Gorecki early sonata for two violins, which is very un- Gorecki-ish compared to the slow-moving style of Gorecki that we all know. This one has more of a Polish-mountain-dance folkloric quality, but you can tell that he was moving towards the slower pieces. One movement is protracted and hovers in the air above everything else.

Then Justin Kagan is going to play a short cello solo that Lutoslawski wrote as a tribute for Paul Sacher, the extremely wealthy Swiss philanthropist who commissioned Bartok’s “Music for Strings, Percussion, and Celesta.” Sacher commissioned Frank Martin, Benjamin Britten, and all sorts of people.

After that piece, an actor will do a brief selection from Elias Canetti’s “Earwitness,” which is a collection of 50 little portraits of different personality types. And this one is call Maestroso, a very funny and poignant portrayal of a conductor. And this we are offering as a 100th anniversary salute to the departed Herbert von Karajan.

The Free Marz concert will close with Penderecki’s String Trio, which is tour de force. It’ll bring the house down.

The festival is called “Songs of Heaven and Earth” and that's a rescrambling of an early Messiaen song cycle called "Songs of Earth and the Sky." Messiaen was such a visionary musician and a servant of his Catholic faith – he was deeply religious. One of his last pieces was called “Visions of the Great Beyond.” So, that's the connection between this festival and Messiaen.

Tell us more about studying under Messiaen in the class that you took at the Paris Conservatory.

Priest: This is something that I learned from my mother when she took me as a kid to meet Willy Mays. The lesson was if you want to meet someone or learn something from someone, just ask them. She called up Willy Mays on the house phone at the Ambassador Hotel in Los Angeles.and said my son would like to come over. And May said, Sure come on over, we’ll talk.

So, that was a preview to what I did with Messiaen. I was a teaching assistant at USC. I was the TA for Pepe Romero in classical guitar. I was going for my masters from USC. I was becoming more of a composer at that time and Messiaen was my favorite. I wanted to write him a letter to tell him how much I admire his music and see if he would look at a score or two and get some advice. A friend drafted my letter into French, because I didn’t know any French at that time. Then about six weeks later, I got a letter back from Messiaen in French. I had to go over to the French department at USC to get someone to read it to me. I found out that he had invited me to his composition class at the Paris Conservatoire. It would be his last year of teaching and he politely invited me. I found out that he was being forced to retire at age 70 because that was the rules. So it was the opportunity of a lifetime.

So I went to Pepe and asked him what I should do. He told me, “You need to go to Paris, Bob, even if you have to swim!” So with Pepe’s blessing I went to Paris to study with Messiaen. After I got there, I started taking intensive French lessons at the Alliance Française. Messiaen’s class was twelve hours a week – four hours a day, three days a week (Monday, Wednesday, and Thursday). He would arrive at class at 9 am and the classes lasted four hours. During those four hours, he never once took a break to go to the bathroom, to drink something – even water, or to eat something. It was four straight hours of discussion, listening to music, analyzing music, occasionally he would bring a guest. One day Takumitsu came, another day Stockhausen came, one day he took us to the Paris Opera to see all of there gongs. It didn’t matter, he never ever took a break.

There were probably fifteen students in the class. I think that I missed only two classes all year. It was fantastic. Overwhelmingly stimulating. He didn’t speak any English at all.

Usually, when he first arrived, he would ask the class, “does anyone have anything they would like to play or show me?” Then the class had an analysis component and we spent the majority of the time on that. This was when Messiaen was working on his opera “St. Francis of Assisi.” It was a secret. We didn’t know the title or the subject of his opera. He was very tight-lipped about that. So, he would never discuss it, but we knew that he was working on an opera. But we spent the analysis part of the class on operas. We analyzed "Wozzeck," "Boris Godunov," "Siegfried," "Götterdämmerung," which he thought was the greatest piece of music ever written period. He thought that Ligeti was the greatest living composer. So, we analyzed Ligeti scores and Dutilleux. Some of his former students would drop in with compositions and play something for us. So it was an incredible spectrum of topics.

Here is a picture of Bob Priest at the class with Messiaen. Priest is the fellow with the beard. He is between George Benjamin and Messiaen. 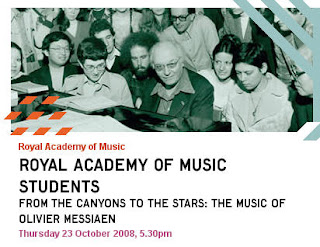 You can find this picture here.
Posted by James Bash at 5:07 PM