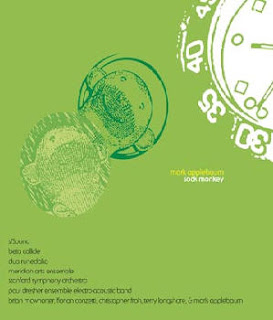 A lot of new music is serious in nature, but the pieces featured in Sock Monkey, a new recording of music by Mark Applebaum, stresses the humorous side. Applebaum teaches composition at Standford University where he directs the Stanford Improvisation Collective, and he seems to have a tongue in cheek approach to music making. The liner notes for his bio indicate that "His music has been played at numerous prestigious festivals in rigorous places like central Europe, and commissioned by fancy, impressive A-list players and ensembles--prominent ensembles." Whatever the case, Sock Monkey the CD, contains 12 pieces, including a piece for orchestra entitled, "Sock Monkey."

Before I begin to ramble on about some of the music in this recording, I have to say that as seemingly funny or absurd some of Applebaum's pieces may sound, the technical demands on the instrumentalists is quite striking. The first number is called "Magnetic North: 86 Public and Consensual Rituals," has a lot of spot-on stops and starts. The music seems to stagger head, but in an almost comical herky-jerky manner. The sounds blurt, bubble, rattle, and roll ahead, always percussive and brief.

According to the liner notes, "Magnetic North" incorporates the absurd into music. For example, "At various times individual players are asked to stand for no apparent reason. One measure is repeated x+1 times where x is the number of times it takes two players to stop playing in protest. In accompaniment of certain solo passages the brass quintet is asked to tap bottles with chopsticks, tear pieces of paper and drop ping-pong balls. At one point in the piece the horn player, located stage right, removes a length of aluminum foil from a roll and sets it at the foot of the trombone player. Later the trombonist will wad the foil into a ball and roll it to the tuba player who, minutes later, place it into a paper bag." There's a lot of this kind of musical high jinks going on and as played the the Meridian Arts Ensemble, which includes Applembaum as mouseketier electoacoustic sound-sculpture and live electronics, the piece does have a spontaneous Joie de vivre about it.

Next come "Theme in Search of Variations I," "Theme in Search of Variations II," and "Theme in Search of Variations III." "TSV I" is for percussion trio and is strikingly softer than any of the previous pieces. "TSV II" features bass clarinet, percussion, piano, violin, and cello -- all of which are played by sfSound. It wild and carefree and for a minute or two some metal things crash while the piano passage wanders aimlessly about before windchimes or some other bell-like instrument takes over with an array of ethereal tones. "TSV III" is played by Beta Collide, a Eugene-based ensemble that features flutist Molly Barth, Tumpeter Brian McWhorter, pianist David Riley, and percussionist Phillip Patti in another hodgepodge collection of seemingly spontaneous and mostly percussive sound. The liner notes point out the unpredictability of the sounds, and I have to admit that this pieces is rife with brief pauses and interruptions.

"Variations on Variations on a Theme by Mozart" finally gets to a place where we can enjoy a distinct tune. The Mozart piece is his variations on the "Twinkle Twinkle little star" childrens song that we all know. Applebaum plays his variations on prepared pianos, and it's fun to hear, because it sounds like some kind of ripped up percussive-toy-piano thing.

Brian McWhorter plays all sorts of impossible sounds during "Entre Funerailles I," which was written for solo trumpet. The "Martian Anthropology 7, 8, and 9, are performed by The Paul Dresher Ensemble Electo-Acoustic Band. The instruments involved in this piece include amplified violin, mallet sampler, data controller, cracklebox, amplified bass clarinet, and bricolage drumset. The premise for the music is that we humans have blown ourselves to smithereens after a nuclear holocaust and some Martian anthropologists have created some music in order to depict what our civilization must have sounded like. Number 7 sounds like the Martians are furiously scratching things with electronic devices. Number 8 is more ethereal-Martian-otherworldly like. Number 9 is more rhythmically-driven.

"On the Nature of the Modern Age" is a work for piano duo and live electronics that seemed to evoke a aura of mystery. "Sock Monkey," played by the Standford Symphony Orchestra is subtitled "Transcription of a Little Girl Running Around the House," and this piece does have a playful and energetic quality.
Posted by James Bash at 9:26 PM