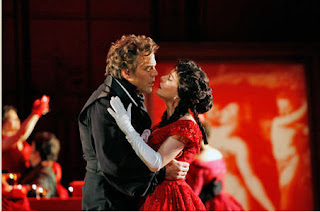 Sometimes you have to wait until the last act of a show to see if the singers can deliver a knockout punch and totally bring the audience into their story. Well, that’s exactly what happened at the Sunday matinee performance of Portland Opera’s production of “La Traviata.” Strong performances by the three stars of the opera, soprano Maria Kanyova, tenor Richard Troxell, and baritone Richard Zeller, caused sniffles to break out all over Keller Auditorium during Act III. That's when Kanyova, as the TB-stricken courtesan Violetta, crumpled to the floor just beyond arms of her lover Alfredo (Troxell) and the saddened gaze of Alfredo’s father (Zeller).

But hankies aside, much of the credit of this production goes to Kanyova, whose beautiful looks are enhanced by terrific acting skills and a wonderful voice. Whether flirting during the party scenes, agonizing over lover, or coming to grips with the fact that she is dying because of her illness, Kanyova embodied the tragic heroine in every sense.

Yet, she started out a little on the shaky side because she sometimes strayed just a little under pitch during Act I. This act is taxing for any soprano and Kanyova was singing with only one day’s rest. Yet somehow her voice improved as the opera progressed and she saved the best for the final act, when she had to alternate between fragility and strength as the illness takes its toll despite the surge of energy she experiences with Alfredo.

Troxell’s voice and acting matched up very well with Kanyova’s. His top notes rang out and he expressed a wide rang of emotions ranging from empathy to frustration and rage. Troxell did duck the high C at the end of the vigorous cavatina “O mio rimorso!” (“Oh my remorse!”), and that was the only glitch in his performance.

Troxell’s acting was convincing throughout, especially when he threw his winnings at Violetta at the end of the gambling scene and received the condemnation of his father and his peers. But he was even better as the grief-stricken lover in the final act. At one point, he picked up Violetta and carried her to her mattress. That was when Kanyova sang while being carried, and she sang beautifully! It was pretty incredible, and I’ve never seen that done before. Also, both Troxell and Kanyova sang from the floor, and Kanyova, all pale and willowy thin got up to sing one last time before expiring. If you don’t feel something at that point, you don’t have a heart.

As Germont, Zeller was superb. His golden-toned baritone supported a character that was filled with sympathy and understanding. It was simply gorgeous and certainly the best performance by Zeller that I have ever heard (and I’ve heard many).

Also, Zeller’s gestures and mannerisms created a Germont who had empathy for the lovers, and that worked well. However, it was odd to see Zeller without a beard or a moustache, and he might have looked a little older and more fatherly with some facial hair.

Hannah Penn created a foxy and slightly kinky Flora Bervoix and Jonathan Kimple was excellent as her counterpart, the Marquis d’Obigny. Brendan Tuohy’s Gastone stirred up the party scene like a swizzle stick. José Rubio made a mean Baron Douphol. Sharin Apostolou turned in a fine performance as Annina, Violetta’s maid.

Stage director Jennifer Nicoll provided clear movement for everyone, and I could easily follow the action and the story. The party scenes were outstanding -- with a little titillation thrown in for good measure. I liked how the revelers did a freeze-frame so that Violetta and Alfredo could interact intimately yet still be in context. The only nit I had was that Violetta had to sit and sing with her back to the audience during the letter writing scene, but I could hear her clearly, so it didn’t matter all that much.

The opera scenery, jointly owned by Opera Colorado and Boston Lyric Opera as part of an original production by James Robinson, nicely matched the transitions in the story. The opera opened with an opulent, decadent, velvetly red dining room in a Paris mansion. The French countryside in the second act was set in winter with frosted trees and a mottled blue sky in the background and white furniture in the foreground. The party and gambling scene at Flora’s house was mostly draped in black, and the final act depicted a desolate, barren garret. Set and costumes by Bruno Schwengl were very well matched throughout, but outstanding was how the gypsy singers flipped their black capes into red evening gown without missing a beat – all right in front of us. Finally, lighting designer Mimi Jordan Sherin deserves praise for framing the production with just the right amount of intensity.

If you haven’t seen this production of “La Traviata,” then I hope that you can get to one of the final performances on Thursday, October 2 or Saturday, October 4. You won’t regret it.
Posted by James Bash at 11:30 PM