Koh on fire in Brahms concerto with the Oregon Symphony 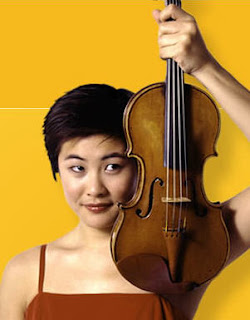 Jennifer Koh gave one of the best-ever performances of the Brahms Violin Concerto on Saturday night with the Oregon Symphony. She played this demanding work with passion, understanding, technical precision, and uplifting artistry, making us hear the music as if we were hearing it for the first time.

Hardly anyone coughed during Koh’s performance. Maybe that was due in part because she seemed to be playing for each individual listener. Koh had complete command of the piece. She mesmerized us by speeding up and slowing down at will, increasing the volume and then throttling it back in mid phrase, and changing the sound from sweet to harsh and agitated. Her cadenza in the first movement contained passages that were as fleet as a cheetah. In the second movement soared with poignant lyricism and the third overflowed with rustic joy. All in all, Koh’s playing engaged our minds and made us forget that time had passed – until the buzz of our voices filled the lobby as we made our way home.

Led by the young, Canadian conductor Jean-Marie Zeitouni, the orchestra played Stravinsky’s “Symphony in C” with verve. Each section of the orchestra had more than one moment to shine, and in some ways the piece evoked many qualities of a woodwind quintet. The orchestra seemed to revel in Stravinsky’s quirky writing, especially for the oboes and bassoons. I also enjoyed the solemnity of the horn, trombone, and bassoon choir in the fourth movement. I kept expecting the music to build to a dramatic ending, but it bows out on a quiet chord, and the audience followed with polite applause.

The concert began with Beethoven’s overture to “Egmont,” which the orchestra interpreted stirringly. The horn section delivered a clear, brassy sound that seemed perfect for this piece. Zeitouni paced the ensemble well throughout and the audience responded with enthusiasm.

I noticed that Ja’Ttik Clark, principal tuba, was sitting behind the trombones and am wondering if that position helps to soften his sound. He used to sit closer to the side wall or the right corner. Perhaps the sound he created came off of the wall too loudly.
Posted by James Bash at 1:54 PM