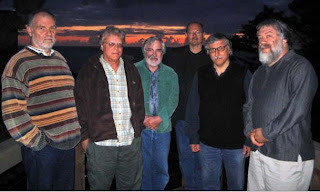 Several of the Northwest's best composers have formed a new group that is part of the National Association of Composers/USA (NACUSA). This new group or chapter is called the Cascadia Composers, and its members will celebrate their first concert on March 13th at the Old Church in downtown Portland with a performance by the Fear No Music ensemble.

In addition, the Cascadia Composers chapter has its own web site, cascadiacomposers.org, where you can find out more about its doings. The group will present a series of free workshops and lectures at the Waterhouse Studio in Beaverton, starting on December 8th at 7 pm.

Wonderful. But, where are the women? No female composers in the NW? Anyhwere? Exciting, yet depressing at the same time to see this group form. I know all the excuses, but... some wonderful music will never be heard I wager. This goes beyond sexism. It highlights one more missed opportunity by the human race, that of finding and celebrating talent -- even gifts -- wherever found. Best of luck to you gentlemen. But, do consider where you might direct your group in this young 21st century, whether there really is something important and valuable about inclusivity and outreach to 52% of the population after all.

There are two women who recently joined (Elizabeth Dyson and Jan Mittlestaedt, and Bonnie Miksch from PSU and Laura Zaerr from the U of O have also indicated their interest in joining). There will be more. Also, some students have said they are interested, but have not committed yet.

As a member of the Cascadia Composers Group, I would have to say to "Anonymous" that I don't find it at all "depressing" that our group has been formed. It is long overdue! First of all, you have made false assumptions about the nature of our outreach. Our concern first and foremost is including talented composers—regardless of sex, race, or ethnicity—and thus far, we have done an excellent job of accurately representing seven of the very best composers this region has to offer. You say you "know all the excuses." What excuses? We don't owe anybody any excuses or apologies for anything. Why do you waste your time trying to turn a positive into a negative? There are plenty of places you can go and lodge your complaints and criticisms. Try the GOP. Obviously, the fact that you refuse to disclose your identity indicates that you are insecure about your opinions (or "stupinions" as I'd be inclined to call them). You "wager" that some "wonderful music will never be heard." That goes without saying. It is not the mission of our group to feature all the "wonderful music" that's ever been written. As David Bernstein, the leader of our group, has pointed out, we have invited virtually all the women composers we know of in the region to join our group, should they wish to. Our outreach has been extremely thorough and comprehensive. You say "This goes beyond sexism." It has been my experience that those who accuse others of committing crimes are usually guilty of committing those very crimes themselves. It sounds like you are trying to censor us. Frankly, if we were to invite people to join us solely on the basis of their sex, we would be guilty of sexual discrimination. Nothing could be more insulting to women. Furthermore, there are plenty of composers' organizations that are exclusively for women and none that I know of that are exclusively for men. You say "it highlights one more missed opportunity by the human race, that of finding and celebrating talent … even gifts … wherever found." I don't understand your logic. How is Cascadia Composers a "missed opportunity?" We are celebrating the talents of seven supremely gifted composers! Go boil your head!

It looks like the first Anonymous poster didn't read more closely that the photo is of the "founders" of the Cascadia Composers group, and made an assumption that the entire group consists of men only.

to anonymiss, get back into your composer citchen and rustle us up a new piece. we'd love to place your offering (burnt or not) on the menu.

ps
i'm not an actual member of the cascadian's yet but know them to be "hungry" for wonderful new pieces by ALL local composers.

At a composer symposium a few years back, when the question came up as to why there weren't more women composers, I blurted out, "They're smarter than us." Was I joking? I still don't know. It was spontaneous - I think more than anything a purely unfiltered reflection on life as a composer in this time and place.