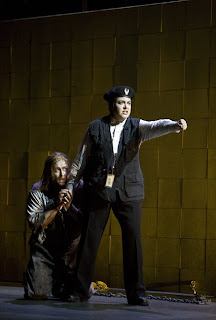 Portland Opera’s production of Beethoven’s “Fidelio,” which opened on Friday night at the Keller Auditorium, is a powerful testament to justice and liberty and faithful love that can withstand all odds. It’s amazing to think that Beethoven wrote this opera 200 years ago and it still speaks volumes, especially when the setting is a contemporary-looking prison that evokes the current situation at Guantanamo Bay Detention Camp. His call for freedom, sung with conviction by an exceptional cast made the Portland Opera performance vibrant and timeless.

Lori Phillips created a devoted and fearless Leonore, who disguised herself as a male prison guard, Fidelio, in order to find her incarcerated husband, Florestan. As Fidelio, Phillips imitated a man’s behavior and unintentionally won the heart of the jailor’s daughter. Phillip’s Fidelio winningly alternated between being flustered and going along with the ploy until she found Florestan in an isolated cell. Phillip’s resilient soprano was remarkable for its strength and clarity, surmounting the myriad of challenges that Beethoven gave her.

Jay Hunter Morris made a memorable impression as Florestan with a voice that had equal measures of power and beauty. His first appearance and long aira, “In des Lebens” (“In the life”) was filled with tangible passion and longing. Morris had everyone in the palm of his hand as he slowly got up from the stage floor and came closer and closer to the audience until he finally realized that his feet were still chained to the wall.

Also combining a wealth of talent in singing and acting were Jennifer Welch-Babidge in the role of Marzelline, the daughter of the jailor, and Jonathan Boyd as her frustrated lover Jacquino. I loved the way that Boyd’s Jacquino impulsively walked over a bed of flowers to get closer to Marzelline. Both singers seemed completely natural in their roles.

The rich, warm bass voice of Arthur Woodley’s Rocco, the jailor of the prison, contrasted very well with Greer Grimsely’s flinty bass-baritone in the role of the Don Pizarro, the governor of the prison. At one point, Grimsely’s character was so mad that he sang with hurricane force right into Woodley’s ear. That must have taken some chrome off.

As the King’s minister, Clayton Brainerd used his commanding presence and voice to make sure that justice prevailed at the end of the story. It was great to see Brainerd, a Portland native, making his debut with Portland Opera in this production. He sang in the chorus the last time that Portland Opera performed Fidelio almost 30 years ago.

The famous prisoner’s chorus scene showed plenty of balance and power. And the final scene with the prisoners being released to their families was uplifting with its ecstatic jubilation.

Conductor Arthur Fagen worked the orchestra energetically and kept the pace of the opera brisk. I didn’t care for the recorded section when a line prisoners were brought in by the guards, but that did work realistically with the set.

The stage direction by Helen Binder worked very well throughout. The last scene, in which the townspeople were mixed around on the stage was a nice touch. When Portland Opera did Fidellio thirty years ago, the chorus (of which I was a member) was forced to some risers on the side, which gave us a good view of the conductor, but seemed incredibly stilted. The current production, originally designed by Chris Alexander, looks more natural and real.

Portland Opera performances of Fidelio run through this week. If you want to experience a dramatic and uplifting testimony to the human spirit, be sure to see it.
Posted by James Bash at 5:32 AM