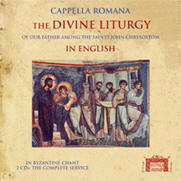 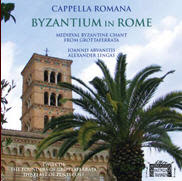 With two recent recordings, Cappella Romana continues to solidify its claim as the world’s premier ensemble for Byzantine chant. The Portland-based vocal ensemble has released ten albums, celebrating the traditional liturgical music of the Greek Orthodox Church during the time of the Byzantine Empire, which stretched from 330 to 1453.

Earlier this year, Cappella Romana made “Byzantium in Rome” commercially available and just a couple of months ago it released “The Divine Liturgy.” Both recordings amply display the richly embroidered tapestry of Byzantine music through religious texts and are well worth your consideration, especially if you’ve never been exposed to the Byzantine sound and want to hear something truly different.

To most of us Westerners, Byzantine music sounds like a combination of Gregorian chant and Middle Eastern chant. This is because Byzantine music often features a cantor (or soloist) who sings against (or above) a choral drone. The choral drone is a sustained sound, normally of level pitch and low. The cantor often sings in the baritone range and uses microtones to chant the text.

The “Byzantium in Rome” recording contains two CD that feature medieval Byzantine music from the Abbey of Grottaferrata, a Greek Orthodox monastery that was founded in 1004 in the suburban hills of Rome, Italy. Cappella Romana’s artistic director Alexander Lingas is a musicologist who has studied many of the ancient manuscripts from Grottaferrata and selected the music for the recording.

The recording features sacred music that blesses the lives of the founders of Grottaferrata: St. Neilos and St. Bartholomew (in the first CD) and serves the religious season called Pentecost (in the second CD). The Greek text (with a translation into English in the liner notes) sounds foreign to my ears, but I do understand the Alleluias, and they are gorgeously extended and ornamented over long periods to time. The soloist/cantor Ioannis Arvanitis sings wonderfully throughout.

“The Divine Liturgy” is a two CD recording of a complete Greek Orthodox service in the Byzantine style and sung in English. Directed by Alexander Lingas, Cappella Romana chants the service's hymns, psalms, and responses in the Byzantine tradition that includes works adapted from Petros Peloponnesios, Nileus Kamarados, and St. John Koukouzelis.

In this CD, the all-male vocal ensemble sings with an assured, well-matched, unified sound, which is always beautiful and never harsh or edgy. The overall effect is very soothing. Solos by John Michael Boyer, Mark Powell, Alexander Lingas, and Ioannis Arvanitis are outstanding.

So, if you would like to hear music takes you on a different path to the heavens, you would do well to purchase one or both of these recordings by the exceptional Cappella Romana.

For sound samples of either recording, see the Cappella Romana web site.
Posted by James Bash at 5:10 PM

Wrote my own review of The Divine Liturgy in English here.