A conversation with Jun Iwasaki, the concertmaster of the Oregon Symphony 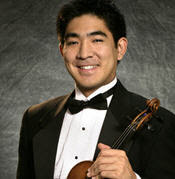 Jun Iwasaki, the 26-year-old concertmaster of the Oregon Symphony, will make his debut with the orchestra in a performance of Erich Korngold’s Violin Concerto this weekend.

You are now in your second year as concertmaster. How has it been going?

Iwasaki - I’ve been enjoying it very much. I’m very lucky to be here and to have this position. Aside from the great orchestra and musicians I get to work with I really enjoy the city a lot, and I like to call Portland my home..

I know that you graduated from the Cleveland Institute of Music, but it would be great to know more about your background. I understand that your parents are involved in music.

Iwasaki - My father, Ko Iwasaki, is a professional cellist and a soloist, chamber musician, and music professor. So I grew up listening to a lot of cello music. He would travel a lot, and through him I got to meet a lot of neat people in the music world. It was inspiring to hear him and others perform music that they loved. My dad taught at home occasionally so it was a privilege to have a glimpse into that world.

My mother, Yurie Iwasaki, was a classical pianist who did a lot of teaching at home in addition to taking care of me as I was growing up and my younger brother. She would also accompany my father and do a lot of recitals with him and other musicians in chamber ensembles.

My father still performs quite frequently with orchestras, not so much in the US, but with orchestras in Europe and Japan. He came to the US on a Fulbright Scholarship and studied with Leonard Rose and Harvey Shapiro at Juilliard. He was a prize winter in the Tchaikovsky Competition and the Cassado Cello Competition and has never had an orchestra job. He commutes from Dallas, Texas to Japan almost every month to teach and perform.

When did you start playing violin? Was that your first instrument?

Iwasaki - I started on the cello at around five years old and it lasted maybe a year. I don’t remember myself disliking the cello, but my parents say that it didn’t work for me. So, they suggested the violin, and that’s the way it has been ever since. Part of it might have been that I didn’t want to do exactly what my dad was doing. I don’t know exactly why. So I started with violin lessons when I was six.

Were you trained with the Suzuki method?

Iwasaki - I grew up in Illinois and my parents found a very good teacher who knew the Suzuki method and used some of the training from that method, but combined it with a more traditional way.

For some reason I assumed that you were raised in Japan.

Iwasaki - I was born in Tokyo, so I have Japanese citizenship. But my parents brought me to the US when I was about three weeks old because my dad was a performing artist at Illinois State University. So, I’ve never really lived in Japan. But I’m fluent enough in Japanese to survive if I were stranded there.

Did you pour your life into learning how to play the violin when you were young?

Iwasaki - I did a little lot of everything. Some people may be surprised, but I wasn’t one of those kids who only did violin practice hours on end. I did my practicing, but I was a normal kid. I liked sports, I liked to play video games, I did all of the usually things like going to prom and homecoming. I went to public schools and played in the school orchestra. It was at college that first went to a focused school for music.

It wasn’t until my junior or senior year in high school that I thought of pursuing the idea of becoming a professional violinist. So, I got my Bachelors and Masters at the Cleveland Institute for Music and then did the concertmaster academy there as well. I was there seven years in all. Cleveland is wonderful city.

When did you decide to pursue the idea of becoming a concertmaster? Was there a person or an event that inspired you?

Iwasaki - I decided to pursue the idea of becoming a concertmaster somewhere in the middle of my college years. I think it was either my jr or sr year in undergrad. And to be honest it was a mixture of both seeing my teacher at work and the idea of being able to play in orchestra, have solo opportunities, and to play some chamber music too. I didn't want to pick just one thing...I wanted to do it all.

And your first concertmaster job was with the orchestra in Canton, Ohio?

Iwasaki - Yes, and some people still think that I was in Canton, China, but it was the orchestra in Ohio.

Tell us more about the concertmaster academy.

Iwasaki - It’s a unique program. I don’t think that any other school offers that kind of program. It’s training to become a concertmaster in terms of playing your music and your role on and off stage. There’s only one student in the program at any given time, and you work directly with William Preucil, who is the concertmaster of the Cleveland Orchestra. You learn the major excerpts that concertmasters have to play in a concert and for auditions. So all of those little solos that you hear in an orchestra concert, I have worked with him. You have to work on all of the bowings, making sure that there’s some sort of unity in your section and the all of the strings. You have to keep the morale up, and ask questions and sometimes not ask questions. You have to understand different conductors. Guest conductors come with their own styles, and if it’s a lot different than what Carlos does, then sometimes my colleagues look to me to lead certain things. In the academy you learn which gestures to use, when to use them and when not to use them.

I try to make eye contact with a lot of people during performances. I like to do that because the orchestra for me is a large version of a chamber music ensemble. Watching the conductor is very important, but making a connection with a section that you are playing something with. It’s not just playing my part and listening to my part. It’s being aware of my surroundings at all times. I like to interact with my colleagues. And part of it is to make Carlos’ life a little easier. If he doesn’t have enough arms to cue the violins because he’s making an important cue in another section of the orchestra, then I can help him.

You seem to be an animated player, your whole body is often in motion as you play.

Iwasaki - I’ve always been a physical player since I was younger. I feel the music in a certain way. But I exaggerate sometimes in order to lead the section. For example, if I want to come in with a very loud entrance, then I have to show a little more than I would if it was just me alone because I’m bringing in 14 other players. They have to see how big of an entrance it is. So hopefully they will see me and come in strongly, too. It’s partly a miming thing, you have to communicate without words. Sometimes during a concert things change suddenly when the conductor decides to do something different from the way it was done in rehearsal. I have to pass that information to others without taking about it. So the concertmaster is a fun job. It’s more than just tuning the orchestra at the beginning of the concert.

What kind of violin do you play?

Iwasaki - I have an old Italian instrument that was made by Hieronymus Amati II. It was made in Cremona in 1695. I had it for about six years, and I love playing on it. It matches my sound. It’s sort of like finding a spouse; you need to spend a lot of time with it. Everything needs to match up. My violin has a darker color than other instruments, but it’s also warmer, too.

Is this the first time that you have played the Korngold Violin Concerto?

Iwasaki - I played it a few years ago with a much smaller, local orchestra. I had a lot of fun, and I love the piece, but I’m really looking forward to playing it with the Oregon Symphony because it has a large orchestra part and with the smaller ensemble, it just didn’t sound right. The way Korngold wrote it, you get to hear a lot of interesting, involved accompaniment from the orchestra. It’s not a boring piece for the orchestra.

How long have you been working on it?

Iwasaki - Because I have already memorized it and played it, bringing a piece back isn’t as difficult, but I’ve been working on it for the last few months. Carlos has wanted to do this concerto for quite a while, and I love the music. So I’m very happy to make my debut by playing this piece with the Oregon Symphony.

Iwasaki - Thanks! I hope that you enjoy the concert.
Posted by James Bash at 6:17 PM