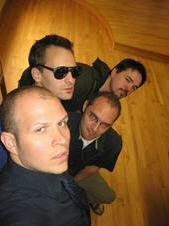 FourScore, a Portland-based quartet of male singers, will sing two shows this Sunday. The first takes place in the afternoon (3 pm) at First Presbyterian Church and the second will be held at the Doug Fir Lounge that same evening (8 pm).

FourScore consists of Stephen Marc Beaudoin, Ben Landsverk, Brian Francis and Ben Kinkley, and their show is entitled "Shut up and sing! Songs of protest, rage and pain." They will perform four centuries of music from Dowland, Purcell, Byrd, Schubert and Kurt Weill to Cat Stevens, Holly Near, Linda Perry, Courtney Love, MIA and Gnarls Barkley. They might also throw in some civil war era tunes, field songs, spirituals, and hymns and more. In addition to singing, each member of the manband will play an instrument, such as the viola, piano, recorder, trombone, percussion, and banjo.

I recently talked to Stephen Marc Beaudoin about the concerts, and he gave me some more information.

You're show title “Shut up and sing! Songs of protest, rage and pain,” covers a lot of territory. It sounds like you’re making a big statement.

SMB – You know, the only statements that are worth making are the big ones. But seriously, looking back on the past year, the concert reflects the tensions and conflicts of events. 2008 has been a wonderful nightmare of political and social upheaval. This is a good time to comment on issues from the political turmoil to the civil rights movement.

How do you incorporate such a wide range of music into your show?

SMB - The way we work is pretty unique. First of all the four of us have a huge range of background in terms of training and experience. Ben Landsverk plays about six instruments and he also performs with some of the top Indie bands in town and is a very fine singer and conductor. Breian Francis was the lead singer in a heavy metal band for several years and is also trained as a singer and loves opera. Ben Kinkley is a nut for barbershop music for whatever reason, and plays a few instruments. I’ve got an eclectic background as well. So I think that the range and choice of material reflects our musical interest. We feel pretty strongly that good music is good music. Whether the music was written by Linda Perry who is a great pop song writer or by Purcell who in his day was a great pop song writer, it’s just great music.

In terms of arrangements, our approach is pretty broad. We want to respect to a point the intention of the composer, but also not take it as the final word. For example, the works by Purcell, Byrd, and Dowland, and any piece that is tune-centric, we usually like to play with deconstructing that tune, and play it with modern instruments, and try some new arrangements of it, or new ways of mashing it up with other music. We try to find interesting ways to take the A section of a pop song and suddenly find that it fits perfectly as a recitative for a Baroque aria. That's the type of connectivity that we are working with.

Are they your arrangements… like for the Cat Stevens number?

SMB – Well, the Cat Stevens tune is out in the public domain, so we have our own arrangement of it. It’s pretty simple. Sometimes we learn and rehearse by ear and do a piece on the fly and sometimes we write down. The four of us have facility enough by ear to pick up stuff and remember it without having to write it down and sometimes we go by charts.

For a 21st century musician, you have to have the facility for a lot of different kinds of music. One day, you might sing a Rameau cantata and the next day sing folk tunes by Stephen Foster. So we mix it up with some four-part a cappella, and then some things are just duos or trios, and some pieces are with instruments.

The four of us share our ideas and they change from week to week. We like to change our programs on the fly and keep our concerts fresh. It will be fun to see what kind of audience shows up at the afternoon show at First Presbyterian and who comes to our concert at Doug Fir.

The Ahs will be guests on our show. They are an acoustic duo of banjo and cello. And Cloud Nine, an a cappella group of young men that Ben Landsverk coaches will be guests at the afternoon program at First Presbyterian. The Roxy Consort will join us at the Doug Fir show.

Best of luck to you. These sound like terrific shows!

I was able to attend part of Fourscore's rehearsal on Tuesday night and I'll just say I'm looking forward to Sunday's concert! The 'Super Flumina' by Palestrina should be spectacular...

I hear that the performances were a little weak. Can anyone confirm that? I love this idea, though!

See Lorin's review that he posted on January 27th: