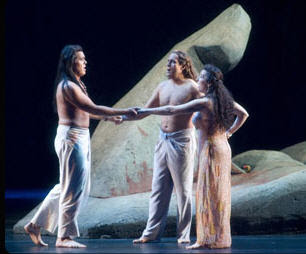 Seattle Opera dove into the luxurious waters of Bizet’s “Pearl Fishers” on Saturday evening and came to the surface with a beautiful gem that needs just a little more polishing. Some unsure entrances and some moments when the orchestra overpowered the singers created a few rough spots that reduced the luster of this opera somewhat. But the outstanding acting, scenery, choreography, and singing by soprano Mary Dunleavy, who was making her debut with Seattle Opera gave this production plenty of enchantment.

Dunleavy, was exceptional in the role of Leïla, the priestess who breaks her vow of celibacy because she falls in love. Dunleavy’s voice has an expansive palette colors that heighten the emotion whenever she sang. Whether she feathered her prayers to the heavens, found joy in her lover’s embrace or spilled venom on the head of a powerful man who wants her, Dunleavy can do it all and make it look natural.

As Nadir, the hunter and lover of Leïla, tenor William Burden sang with grace and conviction, but needed more volume when he sang from the back of the stage. His singing of the demanding aria “Je crois entendre encore” with its exposed high As, Bs, and Cs faded too much at the end.

Christopher Feigum cut a striking figure as Zurga, the chief of the fishing community, and his gorgeous baritone was a pleasure to hear. However, a more menacing tone in his voice would’ve helped in the scenes when he had to threaten and demand. Feigum also needed more power when he was not at the front of the stage.

Bass Patrick Carfizzi’s Nourabad, the high priest, did have plenty of vocal heft (except for the lowest notes) and had no problem invoking wrath.

Perhaps the orchestra, under the baton of conductor Gerard Schwarz, could have played more softly for some of the singers. There seemed to be some hesitancy in the chorus a couple of times in the first act and the orchestra didn’t always gel together, but, all in all, the sound was very satisfying.

Set in Sri Lanka in a bygone era when ocean-side villages were based on the pearl trade, this production benefited from scenery, designed by Boyd Ostroff, which wonderfully evoked the mystery of the orient. The painted scrims conveyed islands with steep mountains that deep bays. In the opening scene the head from a large statue of Buddha dominated one side of the stage while the other displayed a set of steps carved into a cliff. The transparency of the sea scrim was especially effective when the fishermen would dive and swim across the sea that extended from the proscenium to the stage floor.

The costumes, designed by Richard St. Clair, also conveyed the orient. Men wore wrap-around pants and the women skirts flowed well. The scenery and costumes were originally executed by and for Philadelphia Opera, and they were highlighted brilliantly by lighting designer Neil Peter Jampolis.

The stage direction by Kay Walker Castaldo (in her debut with Seattle Opera) was splendid in every respect, from the movement of the chorus to each principal singer in the production. The imaginative choreography by Peggy Hickey picked up on gestures that are common in Hindu imagery, and that enhanced the production as well. Principal dancers Bobby Briscoe and Lisa Gillespie were superb and fun to watch.
Posted by James Bash at 1:03 PM