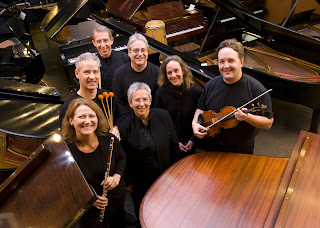 Portland's Third Angle New Music Ensemble will perform a concert of big, minimalist works this Friday at Kaul Auditorium. Paul Griffiths defines Minimalism as a "Term normally applied not to music whose sounds really are minimal but rather to that based on repetition in regular rhythm of chords or simple figures, as in the work of Reich, Riley and Glass." Griffiths goes on to say that Minimalism is "Essentially US in origin, and surely related to rock music as well as to non-European traditions..." So, I encourage you to celebrate an American musical form and President Obama's inauguration by attending Third Angle's concert.

Featured pieces in this concert are the following:

"Music for 18 Musicians" by Steve Reich, which he wrote for a cello, violin, two clarinets and bass clarinets, four pianos, three marimbas, two xylophones, a metallophone (aka vibes), and four women's voices (provided by members of Cappella Romana).

"Piece in the Shape of a Square for 2 Flutes" by Philip Glass will be performed by GeorgeAnne Ries and David Buck. According to Ron Blessinger, Third Angle's artistic director and head honcho violinist, he title of this pieces refers to Erik Satie's "Piece in the shape of a pear," which was Satie's response to criticism from Debussy that his music had no structure.

Here's some more information from Blessinger about this work:

"This is the first piece that Glass wrote in this minimalist style. He was inspired after attending a Reich concert. This piece is 32 pages non-stop for the flutists. They have to use 15 music stands that we will put in the shape of a square. And they will proceed to play with the square of music stands."

"The New Math(s)" - a musical score by Louis Andriessen (OK he's Dutch not American) to the film of the same name by Hal Hartley. Andriessen wrote this piece for flute, voice marimba, and violin.

Blessinger also said that "This is the 50th anniversary of what many people believe was the first minimalist composition. That was string trio composed in 1958 by La Monte Young. So the Minimalism isn't so new anymore. It's just plain great stuff."

Third Angle has some great videos about Reich and others on its blog here.
Posted by James Bash at 1:40 PM