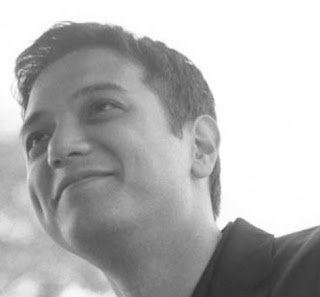 Photo of Nicholas Phan
Mozart’s “Eine Kleine Nachtmusik” (“A Little Night Music”) proved to be an excellent springboard from which the musicians and listeners could dive into newer works at the concert presented by Chamber Music Northwest on Tuesday evening (July 23rd) at Catlin Gablel School.  It was solidly played by violinists Theodore Arm and Daniel Phillips, violist Todd Phillips, cellist Sophie Shao, and double bassist Curtis Daily, but it was the music of Benjamin Britten, György Ligeti, Paul Hindemith, and Joan Tower made much more of a splash at this performance.
Hindemith’s “Kleine Kammermusic” (“Little Chamber Music”) was played engagingly by flutist Tara Helen O’Connor, oboist Allan Vogel, clarinetist David Shifrin, bassoonist Carin Miller Packwood, and hornist William Purvis. They seamlessly varied the tempo, found an incredible balance in the tutti passages, and allowed the colleague who had the theme of the moment to shine. Smooth phrases from the Vogel and Packwood against the rhythmically pulsating line of the O’Connor, Shifrin, and Purvis in the third movement and sudden sonic blurts from each instrumentalist in the fourth injected a bit of humor into this clever piece, which Hindemith wrote in 1922 when he was 27 years old.
Taking things up a notch, Ligeti’s “Six Bagatelles for Wind Quintet” also received superb treatment from O’Connor, Vogel, Shifrin, Packwood, and Purvis. This ten-minute gem, written in 1953 when Ligeti was still in Budapest, travelled all over the place. The ensemble could create a jumpiness (first movement), paint a plaintive atmosphere that was punctuated by clashing sounds like Packwood’s insistent bassoon (second movement), hypnotize with lines that trickled down (bassoon and clarinet) against a melodic passages from the flute, blitz everything with a brief dance (fourth movement), create an homage to Bela Bartok with solemnness (fifth movement), and playfull sprint to the end (sixth movement).
The most recently composed work on the program was Tower’s “A Little Gift,” which she wrote in 2006. This piece started with a unison note from O’Connor and Shifrin that was perfectly matched. If you closed your eyes, you would think that you heard only one instrument instead of two.  The sound from the musicians diverged and seemed to climb higher and higher until climaxing a falling back to the unison note at the beginning of the piece, again matched perfectly in tone.
The most stunning piece on the program was Britten’s Serenade for Tenor, Horn and Strings, in which Britten set six poems with startling fresh ideas back in 1943.  An lush ensemble of 15 strings accompanied the remarkable voice of Nicholas Phan and the playing of William Purvis on the French horn, and together they evoked the haunting and sometimes brooding imagery of the poems, which included works by Charles Cotton, Alfred, Lord Tennyson, William Blake, Ben Johnson, and John Keats.  Phan terrifically modulated from a vibrato to a nearly straight tone or vice versa to emphasize or downplay the text. He could turn up the volume or turn it down so that his voice always stayed just enough louder than the ensemble and his diction was impeccable so that phrases such as “dying, dying, dying” from Tennyson’s poem and “Christe receive thy saule” from the “Dirge” written by an anonymous author stuck in your head long after the music had vanished. Purvis gave an outstanding interpretation of the treacherous horn part, accenting the text and mood at times with a stinging tone.  The strings also played with intensity and a wonderful sense of camaraderie because they didn’t rely on a conductor to lead them.
At the beginning of the concert, artistic director David Shifrin told the audience that this would be the last concert at Catlin Gabel for Chamber Music Northwest. Next year, many of the concerts that would have been held at Catlin Gabel will be shifted to Lincoln Hall at Portland State University. Let's hope that Phan will be there in the near future.
Posted by James Bash at 10:05 AM

thanx for a fine review of a mighty swell evening!

and, yes, the britten with such a wonderful tenor!