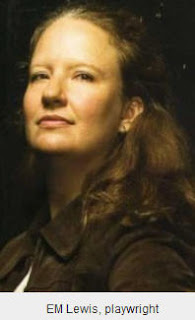 EM Lewis, who is best known as a playwright has been named a Resident Artist in the new Composer Librettist Development Program that is part of American Lyric Theater and funded by the Andrew Mellon Foundation. Lewis has been writing in Princeton for the past three years, and has returned to her home-base in rural Monitor, Oregon (just a few miles east of Woodburn).

Here are the particulars from the American Lyric Theater press release about this unique program, followed by more information about Lewis:

Lawrence Edelson, Producing Artistic Director of American Lyric Theater (ALT), announced today that the company has been awarded a $150,000 grant from The Andrew W. Mellon Foundation to support capacity building and the national expansion of the company's Composer Librettist Development Program (CLDP), the only full-time professional mentorship initiative for emerging operatic writers in the country.

The new grant will allow ALT to expand the CLDP from a 10-month program offered annually, to a comprehensive three-year artist mentorship cycle through which artists will not only receive personalized mentorship, but also be commissioned to write new operas. In addition, newly acquired HD videoconferencing equipment will increase the geographic scope of the program, allowing gifted emerging artists with an interest in writing for the opera stage to participate regardless of where they live. Previously, the CLDP was only able to serve artists living in the metropolitan New York City area. 8 new Resident Artists have been selected to join the CLDP beginning in September, selected from a national pool of applicants: 4 from the New York City area and 4 from cities across the nation.

The new Resident Artists will be introduced to the public during a salon featuring their work at the National Opera Center, located at 330 7th Avenue in New York City, on Wednesday, September 18, 2013.   The evening will begin at 7:00 pm with a wine a cheese reception and an opportunity for the public to meet the artists, followed at 7:30 pm by a short performance.

Founded in 2007, the CLDP is a tuition-free program that includes a core curriculum of classroom training and hands-on workshops with some of the country's leading working artists and has been regularly recognized for artistic excellence by the National Endowment for the Arts. The principal faculty for the 2013-2014 CLDP includes composer/librettist Mark Adamo, composer Paul Moravec, librettists Mark Campbell and Michael Korie, stage directors Lawrence Edelson and Rhoda Levine, and dramaturg Cori Ellison. Recent guest teachers and lecturers have included composers Kaija Saariaho, Anthony Davis, Ricky Ian Gordon, Nico Muhly, Stewart Wallace, Christopher Theofanidis, and John Musto, and librettists Stephen Karam, Donna DiNovelli, and Gene Scheer. Biographies of ALT's mentorship team and faculty may be found at:

In addition to ongoing classes and workshops, composers and librettists in the program have the opportunity to take part in residency observerships at The Metropolitan Opera. Additional networking and membership resources are provided through ALT's partnership with OPERA America.
---
EM Lewis received the 2012 Fellowship in Playwriting from the New Jersey State Council for the Arts, the 2010‐2011 Hodder Fellowship at Princeton University, and both the Steinberg/ATCA New Play Award for Song of Extinction and the Primus Prize for Heads from the American Theater Critics Association. Her plays have been produced around the world, and published by Samuel French.  She is the Dramatists Guild representative for New Jersey.  Recent productions include Song of Extinction at the Guthrie and Hostos College; Heads at Missouri Valley College; Talking to Westfield at Premiere Stages; and the world premiere of Goodbye, Ruby Tuesday at HotCity Theater.  Upcoming productions include Heads at the Pittsburgh Playhouse, Reading to Vegetables at University of Washington, and the world premiere of True Story at Passage Theater in New Jersey.  Current projects include an epic Antarctic adventure story called Magellanica: A New and Accurate Map of the World, an intimate two-person play called The Stone Languages, and The Gun Show.  Lewis was born and raised in rural Oregon, lived in Los Angeles for quite a while, and most recently was writing full-time in Princeton for the last three years.  She currently lives on her family’s farm in the beautiful Pacific Northwest. Residence: Monitor, OR.