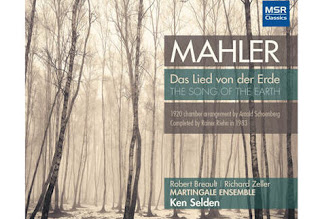 In the autumn of 1918, at the end of the First World War, Arnold Schoenberg founded the Society for Private Music Performances (Verein für musikalische Privataufführungen) in Vienna, Austria, with the purpose of performing contemporary music for an audience that was firmly committed to hearing new work. Over the next three years, until 1921, the Society gave 117 concerts of works by composers, such as Stravinsky, Bartók, Debussy, Ravel, Webern, Berg, Scriabin, Suk, and Mahler. Many performances featured orchestral works that had been distilled into versions for chamber orchestra. One of these was an arrangement by Schoenberg of “Das Lied von der Erde” (“The Song of the Earth”), which Mahler had finished 1909. Schoenberg began his arrangement in 1920, but he apparently abandoned it in 1922 when the Society went bankrupt. German composer Rainer Riehn took up Schoenberg’s sketches and completed the arrangement in 1983, and it is this version for 14 musicians and two singers that the Martingale Ensemble under the direction of Ken Selden recorded last year. Featuring tenor Robert Breault and baritone Richard Zeller, the album, on the MSR Classics label, has just been released, and it’s a revelation to hear the breadth of Mahler’s angst-ridden music in this reduced yet elegant version.

Mahler wrote “Das lied von der Erde” at a time in his life when he experienced a lot of disappointment. In 1907, anti-Semitism forced him to resign from the artistic leadership of the Vienna Court Opera, that summer his eldest daughter died at age of 5, and Mahler himself was diagnosed as having a serious heart defect. In the midst of this turmoil, Mahler became inspired by Chinese poetry that had been adapted by Hans Bethge and set six poems to music in a form that has been described as a hybrid symphonic song-cycle. Much of the text is dark and filled with anxiety.

It is fascinating to hear how a spare group of instrumentalists evoke the main orchestral themes. Schoenberg/Riehn use all sorts of unique combinations to create the  some of the same kind of sounds that larger forces make in Mahler’s original, for example, the first song “Das Trinklied vom Jammer der Erde” (“Drinking Song of Earth’s Sorrows”) ends with low notes from the piano and a few other instruments rather than with the low brass. Of course, the lushness of a full orchestral sound is missing, but the bare, exposed lines in the chamber version can drill just as far into the heart. The musicians, consisting of members from the Oregon Symphony, Third Angle New Music Ensemble, the Florestan Trio, Northwest New Music, and 45th Parallel find just enough Viennese schmaltz to make the music ring true.

Breault fills the drinking songs with gusto and bravado of a man who feels that life is futile. His tone is slightly reedy, but the passion of his delivery imbues the music with a firm sense of conviction.

The most unique feature of this recording is use of a baritone instead of the traditional mezzo-soprano for three of the songs. This is the first recording I have found that has tried such a combination, and it works well because of the warmth of Zeller’s voice. When he sings of beautiful maiden who yearns for the handsome young man in “Von der Schöenheit” (“Of Beauty”), he delivers the text gorgeously.  And he sings the last words of the piece “ewig… ewig” (“forever… forever”) in a haunting way that lasts and lasts.

Ken Selden sets excellent tempos throughout and shows extra attention to dynamic details.  This recording is the second one in which Selden has mined a gem from Schoenberg’s Society for Private Musical Performances. The first one, released in 2011, was a chamber music rendition of Mahler’s Fourth Symphony and of Debussy’s “Prelude to the Afternoon of a Faun” with the Martingale Ensemble (reviewed here). Both recordings are available on Amazon.
Posted by James Bash at 7:41 AM