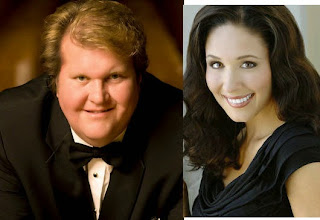 For it next to last concert of the 2013-2014 season, the Oregon Symphony performed Joseph Haydn’s Symphony No. 96 (“The Miracle”) and Gustav Mahler’s “Das Lied von der Erde” (“The Song of the Earth”) with soloists Tamara Mumford and Anthony Dean Griffey at the Arlene Schnitzer Concert Hall on Saturday, May 10th. This was a very strong and interesting program that put the orchestra’s increasing virtuosity on display, and its performance was exceptional except for some balance issues with the Griffey in the Mahler.

The Haydn received an impeccable performance from the orchestra. Fleet ensemble work by the strings and bubbly contributions by the woodwinds combined to make this piece absolutely delightful. In particular, principal oboist Martin Hébert was always spot on in his many solos, inspiring his colleagues to dance along with him. Principal flutist Jessica Sindell and principal bassoonist Carin Miller Packwood also excelled in exposed passages, and at one point in the second movement, they plus Hebert executed a charming trill. Overall, the performance had a lot of refinement without being prissy.

“Das Lied von der Erde” is a symphonic song cycle that Mahler composed in 1908. Its text is based on Chinese poems that were translated by Hans Bethge, and they explored the vicissitudes of life, death, nature, youth, age, experience – all of which were issues that lined up perfectly with the emotional and intellectual turmoil that swirled inside of the composer. Increasing anti-Semitism in Vienna had caused him to resign from his position as the artistic director of the Vienna Court Opera in the spring of 1907, he was also diagnosed with a heart defect, and later that summer he lost his eldest daughter, Maria Anna, to diphtheria. So it is no wonder that bouts of exuberance in “Das Lied von der Erde” are tempered by an overwhelming sense of loss.

The soloists for “Das Lied von der Erde” were top-tier selections. Griffey has won four Grammys and has sung in orchestral halls and opera houses around the world. Mezzo soprano Mumford is a mainstay at the Metropolitan Opera, and appeared there in productions of “A Midsummer Night’s Dream” and “Wozzeck” this season. The concert at the Schnitz marked their first appearances with the Oregon Symphony.

Griffey has sung “Das Lied von der Erde” a number of times to great acclaim, including an appearance with Chamber Music Northwest. He has an incredible voice. It couples size with lyric and robust qualities that most tenors can only dream of. But in this performance, Griffey sang to the folks on the main floor, but never raised his head to sing towards the balcony. So, from where I sat in the lower section of the balcony, his voice was often overshadowed by the orchestra. Mumford did a much better job of projecting to the entire hall, and that made the selections that featured her much more satisfying than the ones that featured Griffey.

Kalmar coaxed a huge palette of sound from the orchestra. Lush, brilliant, and bold colors painted the accusatory and anguished tone of the first song (“The Drinking song of Earth’s Misery”) and the fifth (“The Drunk in Spring”). The plaintive oboe (Hébert) and the constant threading of the violins beautifully accompanied Mumford’s expressive voice in the second song (“The Lonely One in Autumn”), and the light playfulness of the woodwinds matched up perfectly with Griffey’s voice the third song (“Of Youth”), allowing him to finish his last phrase with a cover tone. Quick transitions from soft to loud were remarkably effective in the fourth song (“Of Beauty”), which Mumford sang with a great range of expression. She and the orchestra went into overdrive for the sixth song (“The Farewell”), a 30-minute segment that featured terrific wailing horns, melancholy flute (Sindell), anguished clarinet (Yoshinori Nakao), beautifully sustained tones from the bass violins, slowly rising trumpets, chiming celeste, and terrific orchestral cohesion until the final words “Ewig,.. Ewig” (“Forever… Forever”), which ended the work on a note of hope.
Posted by James Bash at 8:40 AM

I pretty much agree with your review, James. However, at least from where I was sitting in Dress Circle, I thought the balance in the Mahler was generally pretty good, even with Giffey. I heard this piece a number of years ago in Boston with the BSO conducted by Levine. From what I recall, I thought that he pushed the orchestra too hard in the first song. I may be mistaken but doesn't Mahler's score call for the orchestra to go full bore and hope the tenor can cut through it? Given the acoustical difficulties presented by our hall, I thought the piece came off quite well. Mumford was certainly terrific. The last song was quite moving, more so than I remember from the concert in Boston with Anne Sophie Von Otter.

I think that you are right in that the orchestra goes all out and the tenor has to cut through. I just think that Griffey sang to the folks in front of him. If only he had looked up a bit. Darn!