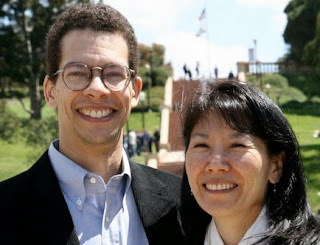 Guest artists Sarah Kwak and Vali Phillips gave persuasive performances of works for two violins and orchestra by Eugène Ysaÿe and Pablo de Sarasate with the Portland Columbia Symphony. They played Ysaÿe’s moody “Amitié” and Sarasate’s light-hearted “Navarra” on Friday night (May 2) at the First United Methodist Church in their debut concert with the orchestra. The concert also marked the debut of guest conductor Peter Shannon, who is vying to become the orchestra’s music director. Shannon led the musicians in creating a sparkling rendition of Hector Berlioz’s “Marche Hongroise” and vigorous one of Beethoven’s Fifth Symphony.

Even though locals know that Kwak is the concertmaster of the Oregon Symphony and Phillps is a member of that orchestra’s violin section, they might not know that the two are married to each other. One would like to think that the relationship of the soloists may have a factor in the overall sound in the Ysaÿe and Sarasate pieces and, well, it was harmonious and extremely well-blended. It didn’t matter that “Amitié” often dwelled in the lower register of the violin or that “Navarra” was mostly in the upper register. Their playing featured seamless exchanges of phrases, and often their timbre was so similar that if you closed your eyes, you didn’t know which one was playing. Communal trilling and smoothly connected glissandos were two additional hallmarks of their performance, but the fun stuff to hear was mostly in “Navarra,” in which requires nimble fingerwork by both soloists at the same time in the highest region of the violin where the slightest slippage would wreck everything. Kwak and Phillips made this duo-high wire act look as easy as walking down the street and chewing gum at the same time. The result was delightful and charming and tickled the ears of the audience. The orchestra, guided by Shannon, provided spirited accompaniment that helped to put a smile on everyone’s face.

The concert began with the “Marche Hongroise” from Berlioz’s opera “The Damnation of Faust,” and the orchestra accented the dynamic contrasts – from robust to dainty and dance-like – very well. The trumpets and horns tweaked a couple of notes early on, but, in general, the piece was played with joie de vivre, and Shannon and the orchestra quickened the pace and the volume at the end, which added an exclamation.

Beethoven’s Symphony No. 5 also received a spirited interpretation, but the execution was a little sloppy here and there. It seemed that Shannon, who conducted the entire piece from memory, caught the orchestra off-guard with some of the transitions that moved the piece into a faster tempo. The strong sections of the piece had plenty of vim and vigor, but Shannon tended to rush things along too fast, and there were noticeable balance issues, such as when the brass overpowered the strings in the second movement and when the orchestra tutti buried the piccolo sound near the end of the fourth movement. I’m not sure if the conductor got overly excited or if he was just impatient, but the overall effect was hurried and blurry, and that was in stark contrast to the other pieces, which were paced well and didn’t arrive at the destination gasping for breath.
Posted by James Bash at 7:48 PM