Review of John Williams: Maestro of the Movies concert with the Oregon Symphony 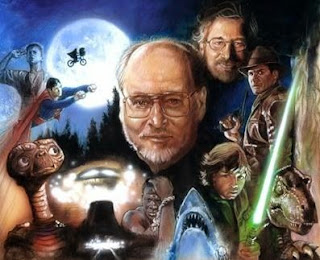 Guest review by Bob Priest
The concert took place on Monday 28 April 2014 at the Arlene Schnitzer Concert Hall with John Williams on the podium. This was a benefit concert for Oregon Symphony's education and outreach program.

"John Williams is our premier film composer. His melodies sing throughout the world, and his lush and intelligent orchestrations complement them perfectly" - John Corigliano (fellow Academy Award winner via email: 5 May 2015)

* PRELUDE *
Upon rare occasion, an incontestably stellar, historic, life-affirming and sensuously revitalizing concert is just that. In other words, when "reel" man John Williams comes to town, I jettison my normal picayune and curmudgeonly critical ca-ca and git right to the gettin'.

OK . . . The Schnitz is a-buzz, lights dim on time, there's a brief luftpause for massed inhale and then, yes, THEN, "he" strides forth. The overflow crowd ignites a spontaneous, unified & completely NON-gratuitous standing ovation! Near delirium is palpable as Maestro Williams beams back to all 2500 of us a broad, slightly shy and gracious smile.

Next, rousing and ruminative accounts of clips from "Close Encounters of the Third Kind" and "Harry Potter" segue nicely into one of JW's many touching stories before closing out round one with "E.T.'s Adventures on Earth." Here, JW reminds us that while aspects of E.T. might now register as a bit dated, the amazed and transfixed expressions plastered across the kids' gobs in the film will remain forever au courant. Likewise, here on the other side of the curtain, we children of the cinema sit a-glazed and gape-mouthed throughout the evening as this 82 year old "kid" in grandpa's tux leads us through a story time like none other.

* INTERMISSION *
While frozen in a "pee wars" queue for the Schnitz's sadly inadequate supply of porto-potties, I notice the throng's hugely varied mix of teens in tee-shirts, dandily dressed down adults and dolled-up Princess Leia wannabes. Not recognizing a single face in this crowd makes me wonder if this gaggle ever finds its way into regular OSO concerts, or are "they" only to be courted and cash-corralled via more and more Pops productions? On this urgency preoccupying failing and frailing symphonies worldwide, JW has this to say; "My guess is that they are two different audiences, the Pops public and the regular symphonic crowd."

Aside from bemoaning ODDience ghettoization, my own frustration extends to wanting to hear some of JW's "deeper catalog" in concert. For example, how many people have heard his superb and unusual music for Robert Altman's cult classic, "Images?" Yet, when I had JW sign my copy of the bootleg LP in Tacoma back in 1992, he told me it was his favorite score. Wow, even "he" has to repeatedly trot out the same ol' fare from his front burner oeuvre.

* ACT II *
So, how does it feel to be John Williams anyway - you know, loved with virtual unanimity around the world? Does he have a big picture sense of where his music rises and falls on the historical scale of a lineage he so proudly and unashamedly carries forth? Well, we are afforded a modestly self-effacing appraisal on this matter by the man himself. As in nearly all of his collaborations with Steven Spielberg, JW viewed "Schindler's List" in its completed form before sitting down to actually write the music. He noted the experience was soooo shattering that he had to leave the screening room at film's end and take a goodly walk around the building to collect himself. Upon return, JW meekly mentioned to the director, "You know, Steven, you have made a REALLY great film here and you need a better composer than me to write the score." To this, Spielberg rather sweetly replied; "Yes, I know, but they are all dead."

Perhaps, but in any event, after a singularly beautiful violin solo from "Schindler's List" is rendered with consummate, full-on Perlman-esque schmaltz by guest violinist Bing Wang, the concert concludes with a glorious bang 'em up 3-spot from Star Wars that would probably even bring a knowing smile to big 'n' bad, proto film daddy Wagner's mug! With this knee-slapping image spooling out on my mind's screen, two seats away from me, a 50-something "kid" Jedi-jams along with wild, stunningly in-synch, con fistiswatto gesticulations. Normally, I can do without such grotty displays but, vut duh L, this is hardly a "normal night" chez the OSO, pravda?

* ENCORES *
After an inevitably roaratorious ovation and three potent encores from "Superman," "Lincoln" and the NBC credits, JW makes a charming sleep gesture with both hands held to his ear as we finally and reluctantly agree to let him go. After all, why the greed? Here's a 100 million dollar MENSCH that just came to our PDX galaxy village with a blistering two and a half hour program, entirely waived his 100K fee, supplied sheet music gratis and simply went about sweeping our ears, eyes, minds & hearts far, far away . . .

* POSTLUDE *
Finally, all PR cliches aside, this concert provides a concrete example of what it REALLY means to "raise the roof" & clear out all fuddy-duddy concert cobwebs. Or, as Ned Lannamann at the Portland Mercury puts it; "John Williams' music is written in our DNA" and during an ambling walk home, I can soundly feel my life's blood a-glow as I catch the distant drift of another transported soul whistling a snippet from "Superman" in the night's air.

---- Dr. Bob Priest is a composer, teacher, and artistic director of the Free Marz String Trio and the March Music Moderne festival.
Posted by James Bash at 11:00 PM

Hi Bob, nice review but you forgot that he also played Raiders of the Lost Ark as his last song.