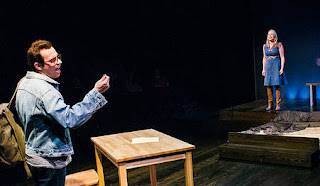 Merideth Kaye Clark and Drew Harper gave impeccable performances in “The Last Five Years,” an award-winning musical by Jason Robert Brown that is currently underway at Portland Center Stage. In the show on Sunday afternoon (May 11th) Clark and Harper left it all on the stage in their portrayals of two young people who fall in love, get married, and then get divorced. The trick in "The Last Five Years" is that Clark’s character (Cathy Hiatt) starts at the end of the relationship and moves backwards in time while Harper’s character (Jamie Wellerstein) moves forward in time. They only sync up in the middle of the story when they get married. But the unusual narrative style, as intriguing as it is, basically destroys any cathartic emotion that theatergoers might have, and the piece becomes sort of an intellectual exercise in which we in the audience are keeping track of where each character is at a certain time in their relationship. That is too bad, since Clark and Harper, under the direction of Nancy Keystone, are such compelling actors.

“The Last Five Years” tells the story of a young Jewish lad (Jamie) who becomes a successful novelist, but his self-centeredness apparently gets in the way of building on the relationship with his wife (Cathy), who is an unsuccessful actress. Initially, she is charmed by him, but she gradually becomes frustrated and needy and resents his success (“miles and piles of you”). As their marriage dissolves in front of your eyes, you begin to wonder if it had any depth in the first place. Adding a few more songs as a way to create more depth probably would have only muddied the water and caused utter confusion among theatergoers who are figuring out where each character is in the relationship.

Brown’s music is written in a flowing style that quickly changes direction to reveal each character’s emotional state. Whether they are belting it out or delivering a quiet lyrical passage or singing in a speaking tone, Clark and Harper are at the top of their games. One of the numbers that Harper sings, “The Schmuel Song,” was an especially engaging story in itself and a highlight of the show. Pianist Eric Little started out just a tad too loud, but within a number or two quickly adjusted to the singers and supported them expertly the rest of the way.
-----
“The Last Five Years” continues at Portland Center Stage until June 22nd.
Posted by James Bash at 12:03 PM