Portland State University's award-winning opera program continued its string of successes with Benjamin Britten's A Midsummer Night's Dream at the Lincoln Performance Hall on Sunday, April 27. Directed by David Edwards and produced by the PSU Opera Department under Douglas Schneider and Christine Meadows, with the orchestra conducted by Ken Selden, the project was a musically ambitious undertaking, and this production showcased the high level of talent that is possible in a student opera.

The opening fairy chorus wanted for more dynamic contrasts to offset the monochromatic melodic lines, but the blocking was fine...slowly acrobatic and appropriately hypnotic. Their later choruses were more nuanced. When Tytania (Hannah Consenz) took the stage, her presence and vocal ability were immediately obvious. When she sang 'Come, now a roundel' later in the performance, it was haunting, and mysterious--completely engaging.

The vocal requirements for the role of Oberon presented an extreme challenge, and it was nice to hear that Loren Masanque was up to the task. The agility necessary for the rapid and difficult switching between loft and modal voices was certainly within Masanque's capability; to hear him do this while maintaining crisp and near-perfect diction was a real pleasure.

When the merry group of players took the stage, they were shepherded by local favorite Andre Flynn as Quince. His fine, robust baritone and comedic timing were crucial to the success of this element.  While Nickolas Hoback's Puck was appropriately...well, puckish...and acrobatic as well as charming, none stole the show so much as Bottom, played by Benjamin Espana. 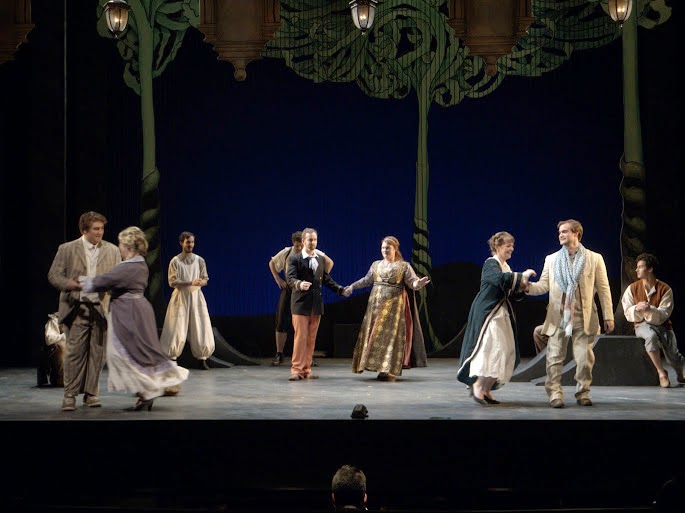 Many things contributed to his success: a ceaseless roguish smile and unflappable air were but the starting point. He showed a flair for difficult physical comedy, as well as nuanced timing, and a wonderful voice with great potential. Many of the laugh-out-loud funny moments were thanks to Espana and those interacting with him.

Another performance of note came from Maria Piro as Helena. She displayed perhaps the most polished and mature singing technique of the afternoon, and certainly did not sound like someone singing only her first lead role in an opera. Not only was her voice marvelous but her acting chops were sound as well; convincing and engaging.

Carey Wong's set was muted and understated, but somehow this worked, imparting an appropriately somnolent air to this fairy dreamland. There was a moment where Oberon's costume combined with the lighting and orchestra to unveil a fantastic interplay as Oberon receded into the background, presenting a truly ghostly scene that was a bit eerie...

All in all this was a wonderful production; Benjamin Britten is definitely not beginner's music, and both singers and instrumentalists were up for it and performed admirably. This is a good work to allow many performers a shot at the spotlight, and there were far more wonderful performances than are mentioned here, and a number of the roles are sung by alternate cast members in other performances. Once again, PSU has shown its ability to put on a big-time show, and to do it very well indeed.  There are two more performances; this Friday and Saturday, May 2nd and 3rd at 7pm. Tickets are available online or through the box office.
Posted by Lorin Wilkerson at 11:01 AM

Thanks for the review! A small edit, the opera was stage drirected by David Edwards, it was produced by Douglas Schneider and Christine Meadows and the PSU opera program. Thanks!
K. Heller Assistant Stage Director

Thanks! I've made the correction to Lorin's review.
- James