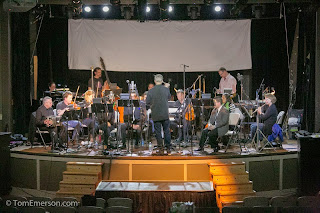 Inspired singing and narration, elegant dancing, and tight ensemble work by Third Angle New Music Ensemble made the performance of “Maria de Buenos Aires” a memorable one on Friday, April 26th at the Wonder Ballroom. A standing-room-only audience packed the house for Astor Piazzola’s unique tango opera, which was delivered in concert format with instruments and voices electronically amplified. Because the narration and the singing were done in Lunfardo, an obscure Spanish dialect of Buenos Aires and Montevideo, a translation of the text was projected onto a screen to the left of the stage. That worked fairly well, but sightlines with which to view the evocative dancing were compromised by the seating, which led to some listeners to just close their eyes and enjoy the sound. 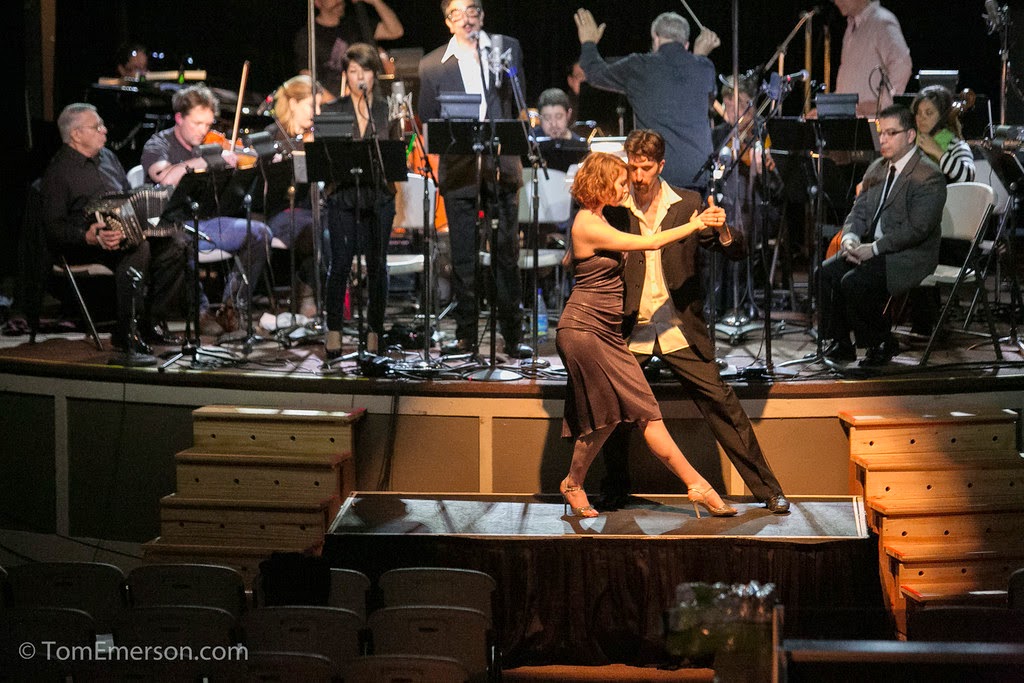 The libretto, written by Uruguayan poet Horacio Ferrer, contains highly charged imagery that is challenging to make sense of. Consider “It will be as old as God and two bruises,” “Here comes the girl, riding her cat like wet nuns of dusk,” and “That your eyes will hold a flat-nosed yard.” Almost every line of text was stuffed with intoxicated verbiage, including an usual word now and then like “archtainted.” I have to admit that without the aid of program notes and other sources, I would not have understood the highly surreal story line at all.

It goes loosely like this: The ill-fated Maria was boor in a poverty-stricken suburb of Buenos Aires “one day when God was drunk.” She grows up very fast (seven days) and soon is attracted to downtown Buenos Aires where she is seduced by tango music and becomes a streetwalker. She dies young. A demon spirit called El Duende or The Goblin summons her spirit so that she can live a second time, but Marie is buried again, leaving her shadow to wander about Buenos Aires. This is followed by circus of psychoanalysts and then by Maria recovering her virginity and giving birth to a baby that might actually be herself.

In a way, it didn’t matter what the text was, because the singing of Michelle Fernandez in the title role and Pepe Raphael as Payador plus the narration of Enrique Andrade was superb. While Fernandez’s lower register was especially seductive, she also commanded the high notes fearlessly, and brought down the house with her rendition of “Yo Soy Maria” (“I am Maria”). Not to be outdone, Raphael gave an impassioned performance, using everything from tremolo, heightened whisper-like singing, and a driving tone to thrilling effect. Andrade also used an incredible vocal palette to texture his delivery, and the result was totally convincing.

Tango dancing by Hannah Poston and Alex Krebs helped to set the story in motion. They were a mesmerizing couple, when you could see them. They made effective use of a very small stage directly in front, but it was only viewable to part of the crowd. They compensated for this by moving around the ballroom aisles and to small stages in the corners of the ballroom, but that meant that some of the audience had to completely around in their chairs to see them, especially the fancy footwork, which is a hallmark of tango dancing. Overall, it seemed that director Jonathan Walters did as well as possible, given the confines of the venue. But if there had only been some extra funding to build an additional raised stage area in the front…

The Third Angle ensemble, conducted by Jeff Peyton, played the music with intensity and verve. The sound was well-balanced and never over-powered the singers. Argentinean Coco Trivisonno delivered the goods on the bandoneon. Other members of the ensemble were violinists Ron Blessinger and Emily Cole, violist Charles Noble, cellist Marilyn de Oliviera, bassist Jason Schooler, guitarist John Mery, flutist Georgeanne Ries , pianist Susan Smith, and percussionists Jonathan Greeney and Sergio Carreno. It would be terrific to experience this piece again sometime in the near future.
Posted by James Bash at 10:00 AM