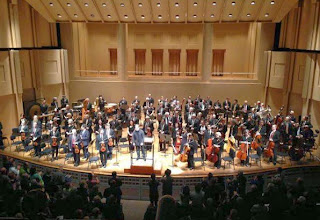 Wave-action was the dominant impression that the Seattle Symphony left in its wake after it performance in Portland last Sunday (March 30th) at the Arlene Schnitzer Concert Hall. The 87-member ensemble, led by its music director Ludovic Morlot, programmed two water-themed pieces, John Luther Adams’ “Become Ocean” and Claude Debussy’s “La mer” (“The Sea”), plus Edgard Varèse’s “Déserts.” In a way, the concert served as a tune up for the Seattle Symphony’s appearance in the Spring for Music festival at Carnegie Hall in May. The orchestra’s performance at the Schnitz was the first-ever in its 111 year history, and it was greeted with a nearly sold-out house in Portland. That good to see, especially in light of the fact that the Oregon Symphony’s debut performance in Seattle last year just barely seemed to fill a bit more than half of the seats in Benaroya Hall.

It was interesting to note that Morlot didn’t use the podium that Kalmar and most guest conductors use at the Schnitz. Instead, it looked like orchestra brought a higher podium with two steps. The orchestra didn’t use risers for the back row (as the Oregon Symphony does), and perhaps that didn’t make much of a difference, because the brass and the horns sounded excellent in all of the works on the program.

The performance opened with “Become Ocean,” which the Seattle Symphony commissioned from Adams and premiered in June of 2013. The orchestra was separated into three ensembles with two percussion batteries on the right and left, a pair of harps on right and left, and a piano right in the middle in front of the conductor. On a special note, Oregon Symphony violinist Emily Cole, whose mother, Linda Cole, is a member of Seattle’s violin section, played in this performance.

As the program notes pointed out, “Become Ocean” didn’t have clearly defined episodes or a narrative of any sort whatsoever. Its music more or less put listeners right in the middle of swelling oceanic waves. Chords of notes slowly surged and subsided. Once in a while, a whale or some other large entity – emoted through a deep bass blur from the lower brass and strings – swam by. Sounds seemed to emerge from afar and from nearby, and sometimes the woodwinds created a sound that was like a choir of harmonicas. Overall, “Become Ocean” was like an hour-long, hypnotic, low pressure system and – perhaps owing to the afternoon timeslot – it sort of lulled the audience asleep. It is probably not the best piece to play while driving long distances, but it could be helpful for yoga.

After intermission, the orchestra’s brass, woodwinds, percussion sections and the pianist reassembled along the wall at the back of the stage to perform Varèse percussive experiment “Déserts.” The style was pointillist yet conversational in that sounds were passed, at times, from musician to musician. There were a number of pinpoint exchanges but the fragmented nature of the piece left me with a feeling of bleakness that bordered on desolation and emptiness. The sounds did affect the audience, because coughing and the rustling of programs erupted from all corners of the hall and competed with the sporadic sounds from the instrumentalists. Varèse wrote the piece to be played either with or without an accompanying electronic tape. I am not sure that the electronic tape would have made all that much difference, but the mood in the hall was fairly charged up for something less dissonant.

Debussy’s “La mer” provided the perfect tonic for the audience, and the size of the orchestra (with its full-sized string sections) gave the music the requisite heft, which made the finale very splashy. However, the first violins bobbled a couple of entries with their exposed high notes in the first movement and sounded a bit wheezy in the last movement when they had to sustain an extremely high note for a long time. The cello section was stellar throughout this piece, especially when they created glorious, golden-hued tones in the first movement and when they combined with the violas evoke tension and suspense in the third. Concertmaster Alexander Velinzon also excelled with his brief solo and the dual harps in the second were terrific. Morlot was a force on the podium and paced the piece very well so that the last crashing of waves were satisfying. The concertgoers stood up and responded to the performance with hearty applause, but I got a sense that they wanted a bit more music to wash into their ears.

It will be interesting to find out how the orchestra does in New York. Alex Ross is a big fan of John Luther Adams music. So, that is a plus, but “La mer” will have to crest at the highest levels for the orchestra to make a big impression. Hopefully, that will happen.
Posted by James Bash at 6:24 PM

I enjoyed the concert, James, but no way did this Carnegie program match the Oregon Symphony's, which was much more substantial and effective. I will be surprised if this program is warmly received in New York but who knows. You are correct. The performance of La Mer had better be fantastic for the orchestra to make an impact. I applaud the Seattle Symphony's effort to be adventurous but they could have done better in choosing a program.

Hi Curtis,
Thanks for your comments. We'll have to see what happens in the Big Apple.