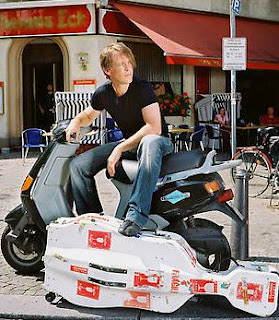 We are incredibly fortunate that cellist Alban Gerhardt has performed with Carlos Kalmar and the Oregon Symphony several times over the last few years. Their ongoing collaboration continues to strive for the highest levels of musicianship as was witnessed on Sunday, April 6th, when they performed Shostakovich’s Second Cello Concerto at the nearly sold-out Arlene Schnitzer Concert Hall.

Because of its grumbling nature and tremendous technical demands, Shostakovich’s Second Cello Concerto almost 20 years have passed since it was last played by the Oregon Symphony (1995 with Lynn Harrell as the soloist and James DePreist on the podium). Fortunately, Gerhardt has the depth of talent, maturity, and insight to explore every facet of this gem. The main thread for the soloist sputters, mutters, and wanders all over the place, but Gerhardt knows how to make it all incredibly interesting with a gorgeous tone, pointed pizzicatos, insistent accents, agitated and unusual sliding passages, and brief lyrical encounters. Sometimes his playing took on elements of a soliloquy and at other times it is more of discussion or an argument with the orchestra. Gerhardt’s interpretation was a soul-searching one – with brief stretches that could be described as positive or hopeful – and it left an indelible impression of music that grappled with the somber consequences of life.

The orchestra provided incisive accompaniment so that it was easy to hear Gerhardt (a not inconsiderable feat considering the acoustic of the Schntz). Associate principal Joseph Berger excelled with plaintive horn calls plus several wickedly high and fast riffs. The extended passages for cellos, basses, and French horns were outstanding. Also beguiling were the lines for xylophone and woodwinds and the segmented collaborations between the cellos, basses and Gerhardt.

The program began with Arvo Pärt’s “Cantus in Memory of Benjamin Britten,” a seemingly simple piece dominated by slowly descending scales that are played at different tempos by various orchestral sections. Kalmar and the orchestra mined the depth of this music with great sensitivity and conviction, creating an atmosphere of somber anguish. Most impressively the orchestra increased the volume incredibly slowly to a loud forte and then decreased the volume incredibly slowly as well. All the way through the piece, a single chime would ring. The final scale-wise descent, ended up with the lower strings and finally just the bass violins. It was a very moving piece.

After presenting two serious and sobering works, the orchestra finished the concert with a bubbling and lyric performance of Antonín Dvořák’s Fifth Symphony. Pleasant melodies the evoked cascading waterfalls and bucolic landscapes spilled out from all parts of the orchestra. The trumpets and trombones rifled fiery fanfares. Thematic material was deftly passed between sections of the orchestra, and often the cellos really shone with a big sound. Assistant principal Other highlights included assistant principal Graham Kingsbury’s post horn call in the first movement and principal Martin Hebert’s lovely oboe in the final movement. The big windup and glorious finale was a crowd-pleaser and the audience went home with a smile. But the main takeaway from this concert, for me, was the Shostakovich and Pärt. Both pieces are reflective on the state of humanity and should be heard more often.
Posted by James Bash at 2:05 PM

The Saturday concert was quite good also. I loved the concerto. I also thoroughly enjoyed the symphony, with which I was not familiar. It was great to hear a Dvorak symphony other than the last three, especially the ninth which I believe has lost much of its freshness due to overplaying.

Hi Curtis,
Yes, you are right about the Dvorak. His 9th is heard too often; so it was refreshing to experience one of his lesser-known symphonies.