For the last few years, pianist Cary Lewis, who is also the Director of Chamber Music at the Astoria Music Festival, has helped to organize a concert at the Old Church, which functions as an enticing preview of the AMF. I heard the preview concert last Friday (June 13th, which featured Lewis and two of the festival’s featured instrumentalists, violinist Sarah Kwak and cellist Sergey Antonov. It was a well-organized, Romantic-infused program, leading off with Kwak and Lewis in Edvard Grieg’s Sonata in C Minor, followed by Antonov and Lewis in Ernö Dohnányi’s Sonata in B-flat Major, and all three collaborating in Johannes Brahms’ Trio in B Major.

Kwak and Lewis opened the Grieg with an engaging exploration of the heavier and lighter themes of the first movement that were linked with smooth transitions and an excellent tonal balance. The second movement led off with a delicate melody that was exquisitely played by Lewis before it was taken over by Kwak in an equally lovely way. Excellent fortes accented some of the passages and foreshadowed the rousing sentiment of the last movement and made the collaboration between Lewis and Kwak a winner.

Lots of thematic and dynamic contrasts were hallmarks of the Dohnányi performance. Antonov’s low rumblings and mutterings seemed to come out of the depths, and they were remarkably juxtaposed to the higher, more lyrical passages that he played. Antonov also cooked up a soufflé of light, agile, and repetitive sounds that, at times, acquired a crusty and agitated flavor. Lewis supported his playing expertly, including some passages that required him to play at the topmost and bottom most ends of the keyboard at the same time. Themes from the first three movements reappeared in the fourth (“Tema con variazioni”), and it was enjoyable to catch several of them, and the piece contained some effective pauses that Brahms would have been proud of.

The AMF is well underway at this point in runs until June 29th. There are a variety of programs, including more chamber music. Check the AMF web site for the latest information. 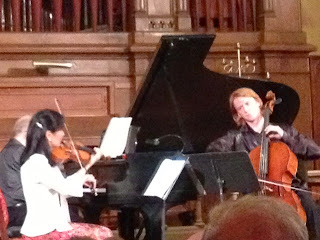