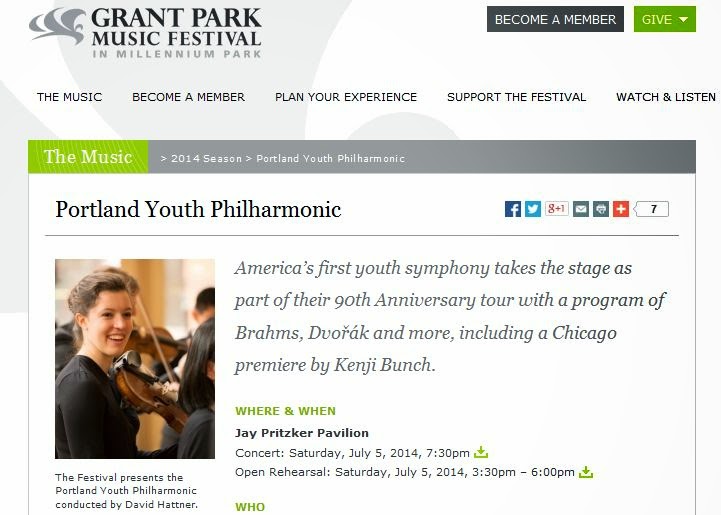 Portland, OR - (May 12, 2014) The Portland Youth Philharmonic and Musical Director David Hattner have been invited to appear in the 2014 Grant Park Music Festival at the request of Carlos Kalmar, Music Director of the Oregon Symphony and Artistic Director and Principal Conductor for the Grant Park Music Festival in Chicago, Ill.  The Portland Youth Philharmonic will perform on Saturday, July 5, 2014 at 7:30 p.m. in the Jay Pritzker Pavilion.  The concert is free and open to the public and will serve as the conclusion of the Portland Youth Philharmonic’s 90th Anniversary Season.
Kalmar says, "The Grant Park Music Festival, the last free Classical Music Festival, is happy to present the Portland Youth Philharmonic. We are a Festival that has gained an international reputation over the years not only for excellent quality, but also for unusual programming. In that sense it is wonderful to partner with PYP, who will bring not only new American music to us, but also a rarely played gem by Dvorak. It will be great to hear such a fine young orchestra in our venue!!"
The concert program will champion many American composers including Kenji Bunch of Oregon, Henry Cowell of California and Christopher Theofanidis of Texas.  Since the mid-1950s, under the leadership of Musical Director Jacob Avshalomov, PYP has nationally distinguished itself among other youth orchestras through its tradition of commissioning and performing contemporary American classical music.
PYP’s Grant Park Music Festival concert will open with the full orchestra version of Kenji Bunch’s Supermaximum, which will also be the Chicago premiere of this work.  Bunch, a Portland native, violist and PYP Alum, has been deeply involved with the Portland Youth Philharmonic for many years.  In addition to transforming his Supermaximum from a chamber orchestra piece into a full orchestral work, he also leads the organization’s music theory program and is a frequent collaborator and chamber music coach.
Following Supermaximum, the Philharmonic will perform Henry Cowell’s Ancient Desert Drone and Christopher Theofanidis’ Visions and Miracles. The second half of the program will offer more standard classical fare in Brahms’ Academic Festival Overture and Dvorak’s lyrical Symphonic Variations.
Before they depart for Chicago, the Portland Youth Philharmonic will continue its pre-tour tradition of performing a free open-air concert in Portland; this year’s event will be held on Wednesday, June 25, 2014 at noon in Pioneer Square, Portland’s Living Room.  The entire community of Portland is invited to come out to support their Portland Youth Philharmonic musicians and give them a proper send-off before they make their mark in Chicago.