Grosvenor's Portland Piano International recital one of the best ever 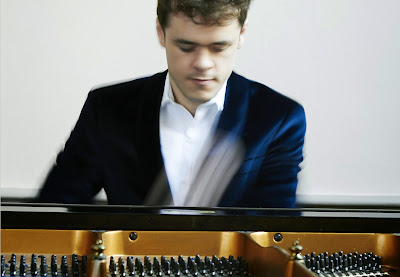 Pianist Benjamin Grosvenor unleashed the subtlest of dynamics and blessed them with just the right tempi during his performance on Monday evening (March 9) at Lincoln Hall at part of Portland Piano International's recital series. His meticulous artistry brought out the essence of each piece on the program in an intimate way that made listening to the music a life-enhancing experience.

Playing works by Chopin, Ravel, Granados, and Scriabin, plus an arrangement by Adolf Schulz-Evler of Johann Strauss’s “Blue Danube,” Grosvenor, a 22-year-old phenomenon from England, constantly probed each phrase of each piece yet kept everything within the arc of the piece. He found sounds that shifted from soft to softer to softest with all sorts of gradations in between. His mezzo-fortes to double fortes were also impressive in their variety.

Coupling artistry with flawless technique, Grosvenor’s playing of Chopin’s Ballade No. 1 and Ballade No. 3 exposed new tonal colors – even to those of us who have heard those pieces countless times. The same could be said for his interpretation of two Mazurkas (F minor, Op. 63, No. 2 and C-sharp minor, Op. 30, No. 4) and of the Barcarolle in F-sharp Major, Op. 60 as well as the “Andante Spianato et Grande Polonaise Brillante.”

In his performance of Ravel’s “Valses nobles et sentimentales,” Grosvenor explored all sorts of nuances, including excursions that were articulate yet playful and others that featured lovely soft suspensions. Grosvenor created a series of natural transitions from serious to lighthearted in Granados’ “Valses poeticos,” and left an indelible impression with an immaculate blitz of notes at the end of the piece. His playing of Scriabin’s “Valse” was wonderfully explosive and flamboyant. Taking it up a notch, he concluded his program with Evler’s arrangement, the “Blue Danube,” which left effervescent sounds swirling towards the ceiling of Lincoln Hall.

The audience erupted with its second standing ovation (the first one happened before intermission), cheers and bravos, which brought Grosvenor back to the piano for two encores. The first was a soothingly light piece, “The Fountain and the Clock” by the Spanish composer Fredrico Mompou. The second was all virtuosic fireworks, a Concert Etude by Ernst von Dohnanyi. Both were marvelously played by Grosvenor.

For those of you who missed the opportunity to hear Grosvenor, don’t despair. He will be back next season to play a concerto with the Oregon Symphony. That should be an exceptional concert.
Posted by James Bash at 2:58 PM