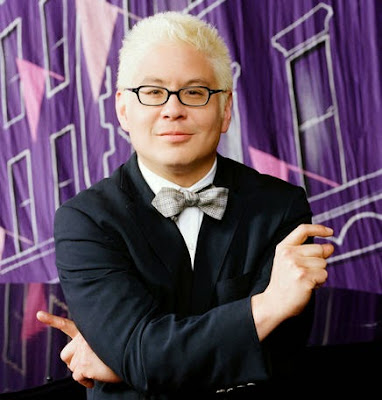 Popular bandleader and hometown icon Thomas Lauderdale went into overdrive in his performance of Beethoven’s “Choral Fantasy” on Saturday (March 14) at the Arlene Schnitzer Concert Hall. It was a bit of a stretch for Lauderdale. His runs up and down the keyboard were not smooth, and he missed some notes on the top end. But he did bring a lot of energy and enthusiasm to the stage and that resonated well with the audience, which responded with boisterous cheers and a standing ovation.

Most serious pianists at the top of their game don’t bring a bottle of water onto the stage with them, but Lauderdale being Lauderdale got away with this. He also got carried away with flinging his arms about after finishing an arduous passage of which there were several. Perhaps if he had done that gesture only at the end of the piece, it wouldn’t have been distracting. He has a charismatic personality that connects extremely well with the audience, and as a cheer-leading member of the orchestra’s board, he has done a lot to promote the orchestra and keep it in the black (the New Year’s concerts, for example, which generate lots of money that goes directly into the orchestra’s coffers is attributed to Lauderdale).

The choral part of the “Choral Fantasy” was performed with distinction by the combined forces of the Portland State Chamber Choir, Man Choir, and Vox Femina, all of which were prepared by Ethan Sperry. The blend was excellent, but the diction (lots of tough German words) needed a little more clarity. Because the soloists and choir were all packed into the balcony behind the orchestra, amplification was effectively used.

In the second half of the concert, Lauderdale played Louis Moreau Gottschalk’s “Grande Tarantelle for Piano and Orchestra.” Lauderdale faired a little better in this piece, which was kind of like a souped-up salon number. But again his runs tended to be ragged in the few exposed sections. Still, the audience loved it, and embraced Lauderdale with loud adoration.

The program began with a sensitive interpretation of Hindemith “Nobilissima vision” (Concert Suite from “St. Francis”). The dirge-like seriousness at the start of the piece featured a marvelously soft collaboration between the strings and the clarinets. Flutist Alecia DiDonato Paulsen created a lovely wandering line that wafted above while others established a sense of someone walking slowly. Zachariah Galatis’ piccolo combined with the percussion section to elicit a military-like march. A throbbing bass passage contrasted strongly with a mellow flute line and lyrical violins. Somewhere along the way, Martin Hébert’s oboe declared a wonderfully simple melody. The ensemble, with the brass weighing in, built up the sound until it became massive and out of that emerged a noble theme – shared by all sections of the orchestra. Overall, conductor Carlos Kalmar and the orchestra evoked the enigmatic nature of this piece and made it very satisfying.

The concert ended with Randall Thompson’s Second Symphony, a lively and optimistic work. From the energetic and vigorous opening to the jaunty theme in the finale, the orchestra played with intensity and made the piece thoroughly engaging. Trumpeter Jeffrey Work and timpanist Jonathan Greeney teamed up for a series of exciting riffs. Highlights included surging sforzandos from the French horns, expressive melodies from the woodwinds, pronounced and dramatic shifts by the entire ensemble, and a brassy reflection from the bass trombone. It was a fun piece to hear, and it made me wonder about the other symphonies that Thompson wrote.

Returning to Lauderdale, his bio in the program started with the statement that he has thought running for the office of the mayor of Portland. I think that he would win such a contest, and that would be a good thing for the orchestra and musical arts, which continue to struggle in the City of Roses. On top of that, which other mayors across the United States can play anything besides chopsticks on the piano?
Posted by James Bash at 10:53 PM

Thanx for your detailed & enthusiastic review. It's always to good to get many perspectives on a given concert.