“Guys and Dolls” on a roll in Portland 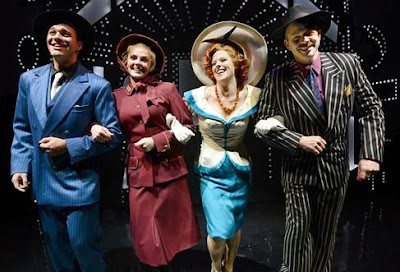 The national tour of “Guys and Dolls” rolled into Portland a few days ago, and the cast did a bang up job in its performance on Wednesday evening (March 11) at the Keller Auditorium. Matthew J. Taylor had that unique combination of suave and debonair and all-American swagger that made the role of Sky Masterson, high-level gambler, a winner. Taylor was well-matched by Kayleen Seidl , who created a no-nonsense, yet ready to cut loose at any moment Sarah Brown, the Salvation Army leader and love-interest of Masterson.

Lauren Weinberg’s Adelaide was wonderfully cheesey with a New York accent that could take the chrome off the bumper of a ’55 Chevy. As local gambling honcho Nathan Detroit, Christopher Swan kept an engaging stream of banter going with all of his gambling cronies while diligently extending his engagement to Adelaide as long as possible.

Todd Berkich, as Nicely-Nicely Johnson, got everyone swaying with his terrific singing of “Sit Down You’re Rockin’ the Boat,” setting off exuberant dancing and singing by the entire ensemble. The razzmatazz neatly paralleled the wild scene in Havana with Brown and Masterson.

Cliff Blake wielded a gruff Jimmy Durante-esque voice as Harry the Horse while John Galas as Big Julie intimidated everyone with his fire-hydrant stance. John Ryan’s avuncular Arvide Abernathy provided reassurance that at least one person wasn’t worried about winning souls or a game of craps. Michael C. Thatcher’s serious-minded Lieutenant Brannigan and Jesse Graham’s stolid General Cartwright were excellent counterweights to the collection of con-men and saucy women.

The scenery, designed by Randel Wright, efficiently set the locations with a minimum of fuss. The costumes were a combination of zoot suit riot, spats, and pinstripes for the men, burgundy outfits for the Salvation Army-folks, and skimpy, sexy numbers for the ladies of the night and the hot box girls. The orchestra, conducted by Peter Nilsen, consisted of just nine musicians, but their playing was spot on, making the most of Frank Loesser's music. Stage director Jeffrey B. Moss and choreographer Bob Richard set a brisk pace that was engaging from the get go.

The biggest challenge for this show was the amplification. For some strange reason, everyone was over-amplified, which made it difficult to understand what was said or sung. After intermission, I moved to a side section that was not directly in the line of the huge speakers, and I found that I could understand all of the words much better. Amplification in the Keller seems to be the biggest bugaboo for touring shows. Getting that show that gets the right amount of amplification is a crap shot.
Posted by James Bash at 11:47 PM